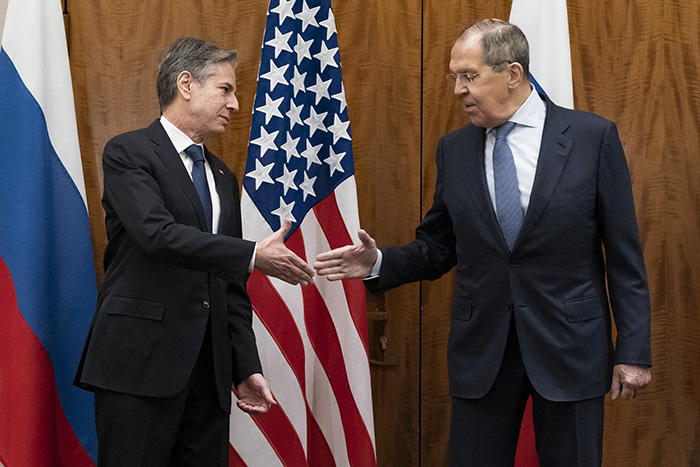 Secretary of State Antony Blinken on Tuesday spoke again with Russian Foreign Minister Sergey Lavrov “to follow up on” the written document that Washington delivered to Moscow last week aimed at resolving the worsening security situation on the Russia-Ukraine border.

In his call with Lavrov, Blinken “urged immediate Russian de-escalation and the withdrawal of troops and equipment from Ukraine’s borders,” according to a readout from State Department spokesperson Ned Price. Blinken also “emphasized that further invasion of Ukraine would be met with swift and severe consequences and urged Russia to pursue a diplomatic path.”

The conversation between the two top diplomats came amid debate over recent communication between Washington and Moscow — specifically, whether Russia had responded yet to the written document that the United States delivered last week addressing Russia’s security demands. Russian officials on Tuesday denied that Moscow had presented its own counterproposal.

Kremlin spokesperson Dmitry Peskov acknowledged that Moscow had relayed to Western officials “other considerations, on a somewhat different issue,” according to The Associated Press. But he told reporters there had been “confusion” regarding Russia’s fuller response to the US written document, which he said is still in the works.

Russian Deputy Foreign Minister Alexander Grushko also told the Russian government-owned news agency RIA Novosti that it was “not true” that Moscow had transmitted its response to the United States.

Prior to those remarks by the Russian officials, a State Department spokesperson confirmed on Monday that US officials had “received a written follow-up from Russia.” But the spokesperson declined to provide further details on the communication, saying, “It would be unproductive to negotiate in the public, so we’ll leave it up to Russia if they want to discuss their response.”

The back-and-forth between Washington and Moscow began after The Washington Post reported on Monday that Russia had “delivered a written response” to the US written document, which US Ambassador to Russia John Sullivan presented to Moscow last Wednesday.

The production of the US written document followed a month of intense talks meant to resolve the Russia-Ukraine crisis, which culminated in Blinken meeting with Lavrov in Geneva.

Blinken left that session pleading to present Russia with a written record of Washington’s concerns about Moscow’s behavior and proposals to end the security crisis. He also said he expected to speak with Lavrov again “in the coming days.”

After the United States presented Russia with its written document last week, however, Russian officials criticized the response, which Lavrov said “contains no positive response on the main issue.”

US officials have already refused to provide specifics about the written response they presented to Moscow, but the United States had ruled out Russia’s major requests: that NATO pull back its presence in the Baltics and Eastern Europe, and that Ukraine and Georgia be permanently barred from joining the military alliance.

Nahal Toosi contributed to this report.