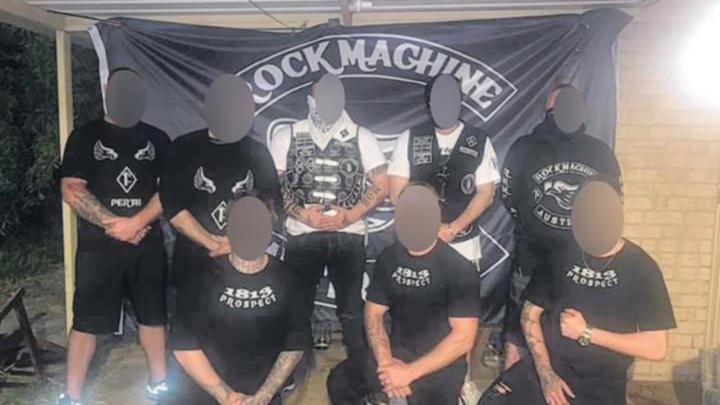 If we needed more evidence that bikes aren’t the sharpest tools in the shed, this is it.

Ben Harvey thought he had already encountered the dumbest outlaw in Western Australia, when he heard about Chris’ Ballistic Grove.

‘Ballistic’ has complained about how anti-motorcycle laws shifted from Western Australia to Nazi Germany – while being filmed standing in front of a swastika.

But now Harvey, chief correspondent for The West Australia, thinks he has a new contender, after reading about a line of ambitious bikes that have apparently fallen into an online scam that includes fake patches.

“These guys are dumb but look like Einstein compared to a bunch of Rock Machine wannabes who were tricked into an online scam by someone distributing fake pique club patches,” he said on Monday night’s episode of Up Late.

“Someone over there searched Google for ‘how to join a rocker machine’ and found a guy selling club gear.

They handed over a few hundred dollars, got things in the mail, and thought ‘Hello Presto, we’re motorcycles.

“This infuriated the real Rock Machine, and now there are two groups of Rock Machine gangs in Perth – the Rock Machine gang who patched up a gang called the Satudurah a few years ago and trace their legacy back to Canada where the war with the Hells Angels 70 saw their car bombs go off.

“And the other RockMachine — that includes idiots who thought joining an outlaw motorcycle gang was as easy as logging into RockMachine.org.”

Harvey talks about motorcycles, including shocking rumors about the opening ceremony, from 2:25 in the clip above