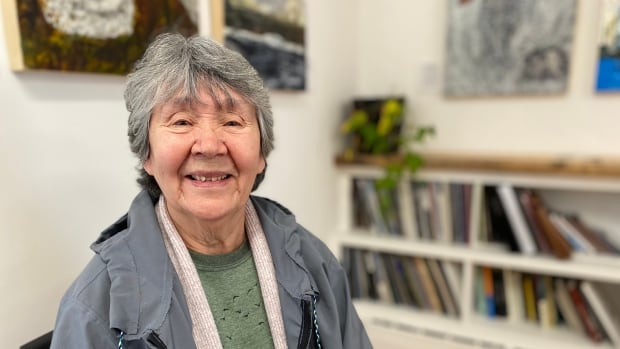 Young, a retired management consultant, spent most of her time working with Indigenous communities, including with Ford’s daughter, Valerie Pilgrim, and during one of Pilgrim’s visits to Young’s studio in St. Ignite it.

Young says she was fascinated by Ford’s stories and wanted to collaborate with her. Young, a non-Indigenous person, said she believes working together to tell stories is an important part of the reconciliation process.

Encaustic painting involves using a heated medium to create artwork. For her paintings, Young melted beeswax and tree resin together and added layers to the paintings, scraping away the layers of wax to display the colors underneath, and even including wax molds and images printed on tissue paper.

Young has been working on extended maps of various places throughout the province, one of which is Hebron, a community resettled in northern Nin which is now a National Historic Site of Canada. When Pilgrim saw the map, she told Young about her mother’s connection to the area, and the chain was born.

Stories from the heart

When Young first contacted Ford, she couldn’t believe someone would want to tell her stories through their artwork, but she became fascinated and even a little excited about the process.

Ford told Young stories about her parents, living off the land, going to boarding schools in Labrador and going to St. Anthony, on the northern Newfoundland peninsula. When Ford’s parents would go to their winter gathering place, she would stay at Nine’s boarding school. When Ford was eight years old there was no boarding school teacher in Nine and she had to go to Yale School in the Northwest River.

“I grew up sometimes there were tough times, but the best times I really enjoyed were when we go down to earth and go out most of the time. [of the year]. Then, of course, it was about going to school, which I wasn’t really bothered about, but I went anyway, because of course you listen to your parents,” Ford said.

Ford says she “couldn’t get past” Young’s paintings and is proud of the work they created together, with her favorite work on her story going — picking eggs from nests — with her sister on an island between Nain and Hopedale.

“I had nothing in which to lay eggs, so I used the cover of my jacket, so when I was going down, and climbing up the hill, to the boat, my mother was looking at me and said, ‘Eileen, you’re leaking…’ Some of the eggs on the bottom had cracked and [leaked] Ford said.

Not all stories are happy. Young says one of her favorite pieces is about Ford’s relationships with her children, grandchildren, and great-grandchildren and how they have changed throughout her life.

Ford said there was no one who cared for her in the boarding schools she grew up in, which she believes is why she didn’t even learn later in her life to hug her children and tell them she loved them.

“I’ve been seeing him in the movies and I’ve always wished there was someone who could come up to me and hug me and say they loved me,” Ford said.

She said that telling her stories wasn’t always easy for Ford. She said she was shy, like her father, grew up Aboriginal, and sometimes felt like “nothing” – but she no longer feels that way, and realizes that sharing her experiences can help others.

“It will certainly empower people if they tell their stories,” Ford said.

The series includes 15 pieces so far, complete with additional pieces. Eight pieces are on display at Juniper House, Memorial University’s Center for Indigenous Student Programming and Services. The entire series will be shown at the Craft Council of Newfoundland and Labrador from February 25 to April 1.

From Harlem to Money Heist: The Seven Best Shows Streaming This Week | TV and radio