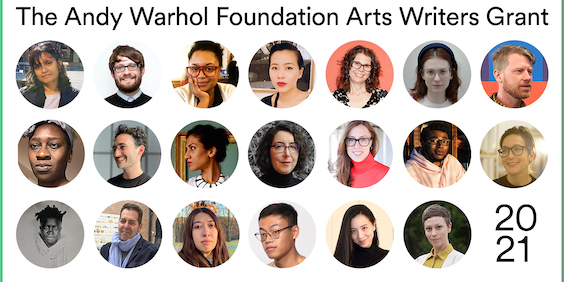 The Andy Warhol Foundation’s Art Writers Grant has named the 20 writers who have received its 2021 grants, totaling $695,000. Recipients work across three categories — articles, books, and short writing — and each will receive an award between $15,000 and $50,000. Grants, administered by Creative Capital, are issued to support contemporary art writing and are intended to advance critical writing in relation to the visual arts. The work considered ranges from brief reviews in journals or newspapers to in-depth book-length studies, on topics targeting both public and private interest audiences.

“The Andy Warhol Foundation Book Art Scholarship supports a vital component of the visual arts ecosystem—the book. These critics and scholars do the important work of chronicling, contextualizing, and intricating our contemporary moment as expressed by artists,” said Joel Wax, President of the Andy Warhol Foundation for the Visual Arts. “The Art Book Scholarship recognizes the rigorous and generous engagement that art writers have with artists and their work and celebrates their ability to shed light on artistic interventions in the structures that govern our contemporary cultural moment.”

“It is exhilarating to see the enormous geographic reach and international framing that many of this year’s awardee art writers are involved in their work,” said Pradeep Dalal, Director of the Art Book Grant. Emphasizing the role of artist communities, with practices spanning literally every continent, these projects speak of the desire for exchanges that cross borders as well as those that establish a connection across uncharted ‘South-South’ axes, rather than going back to Europe or American art history. . Among those whose work Dalal singled out as embodying the cultural zeitgeist are Chen Wang’s writings on the presence of the Chinese diaspora in various African countries and on the rapidly evolving discourse on “blackness” in Chinese cyberspace, Teona Nikia MacLeodden’s writings on Cuban artist Bilqis Ion, and T.K. . Smith on the role of monuments and on the racial and sexual nature of public spaces.

Below is the full list of recipients of the 2021 Warhol Foundation Art Book Scholarship.

Priyanka Basu, “Between Past and Present in Tony Chatterjee’s Okul Nodi”

Fiona Alison Duncan, “Pippa: Queen of the Future – On the Transgress Life of Art Pippa Garner”

Erica N. Cardwell, The Wrong Is Not My Name: Essays and Stories on Black Feminist Visual Culture

Rebecca M. Schreiber, Visualizing displacement in the Americas: Aesthetics of mobility and
paralysis

Gloria Sutton Against the immersive: video sculptures of Shigeko Kubota

jordan troller, The Offspring of Sculpture: Motherhood and Artistic Creativity in Ruth Asawa in San Francisco