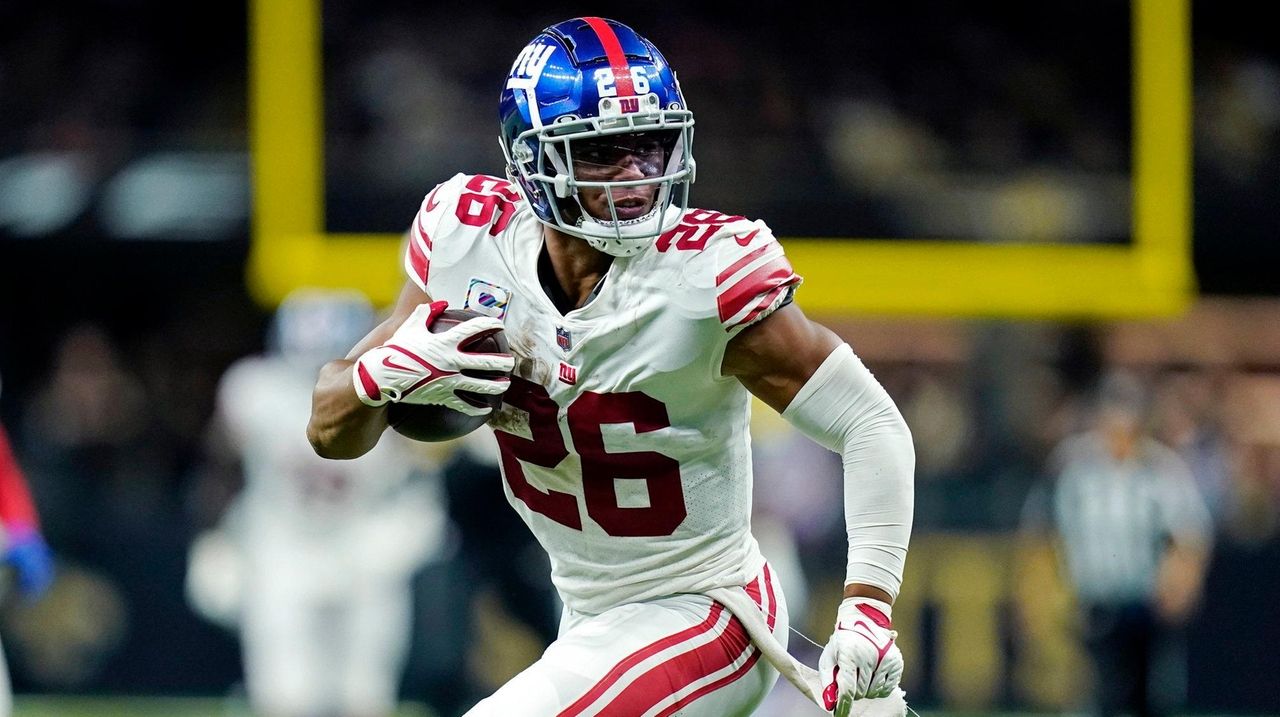 Saquon Barkley on Friday declined to go into detail about the ankle injury that has kept him out since October 10. But he did not hesitate when asked to describe her psychological effect on him.

“It’s obnoxious,” said the Giants as they ran back after a workout, speaking to reporters for the first time in about five weeks. “As a competitor, you want to be there.

“It’s been a whole year, and he’s missed 14 matches because of my knee injury [injury in 2020] And having to watch all the games on TV or be there [in the stadium]. And then having to miss three or four games, it’s obviously disgusting.”

However, it appears that the last wait for Barkley may be over.

He was restricted to practice on Friday and coach Joe Judge said no decision had been made on whether he would play against Boston on Monday night. But things seem to be moving in that direction.

“I feel good, I’m getting better every day,” Barkley said.

He played in only two games last season due to a ruptured ACL. He had 195 flowing yards and another 130 receiving yards this season when he rolled his left ankle against the Cowboys when stepping on the foot of Jordan Lewis of Dallas.

At first, there was hope that Barkley would only be out a week or two. Instead, he missed four matches. “When the MRIs came back, we obviously knew it was going to be a little trickier than we thought,” he said.

Barclay said that he might have been able to come back against the invaders on November 7, and a false positive COVID-19 test wouldn’t have kept him out of this training week.

“Sure, I think you could say that took me away from what I would have liked to have done,” he said. “But nobody knows, and I can’t foresee that.”

Barkley said he spent his forced COVID-19 break playing the video game “Madden NFL” – he never picked the Giants because he is “too close to home” – and board games with his family.

He was able to keep up with his physique because he has a gym in his basement.

When asked if he feels “100%,” Barkley admitted some pain from the rehab process.

He said he had not taken into account what their two severe injuries in two years might do to the value of his future contract. He said he was only focused on the present.

“Everything we want to achieve is still there, so try to come back as healthy as I can and try to run in that thing,” Barkley said of the 3-6 Giants.

“I have a ‘C’ on my chest for a reason, to be a leader,” he said, adding that his expectations are simply “to take it one day at a time, to be the leader that I am and to be the playmaker that I know I can be and I know I am.” I will be too.”

Notes and quotes: S Logan Ryan has missed training due to COVID-19 protocols. While the judge hasn’t ruled him out, it seems unlikely that he’ll play on Monday. The Giants said Ryan was tested on Thursday due to close contact outside the facility and tested negative. His test result came back positive on Friday. Julian Love plays a bigger role if Ryan gets out. “It’s definitely a hit, but we’ve got some resilient guys,” Love said. . . LB Lorenzo Carter missed training with a non-COVID illness.

Neil Best first worked on Newsday in 1982, returned in 1985 after turning to Alaska and has been here ever since, majoring in high school, college basketball, the NFL, and most recently in media and sports business.