Prince William He showed his support to grassroots football fans in hopes of saving the “heart and soul” of their clubs.

The Duke of Cambridge, 39, visited Dulwich Hamlet Football Club in the south London, to talk about Fan Led’s review of football governance, which was introduced due to the controversy over the proposed proposal European Premier League.

William, as president of the Football Association, met with the club manager Peter CrouchIts president is Ben Claspear and the review chair is former Sports Secretary Tracy Crouch.

It’s not the first time William Crouch, 40, has met the England football star who was invited to Kensington Palace in March 2020 to interview the Duke on an episode of this Radio 5 Live Peter Crouch podcast released over the summer.

They chatted about pints of beer and ready-made curries delivered to the royal residence and looked relaxed and jovial in the video and photos released from the meeting.

Prince William (center, with Peter Crouch, right) met footballers, fans and management from a range of clubs to discuss the government’s far-reaching review of how the game is run. 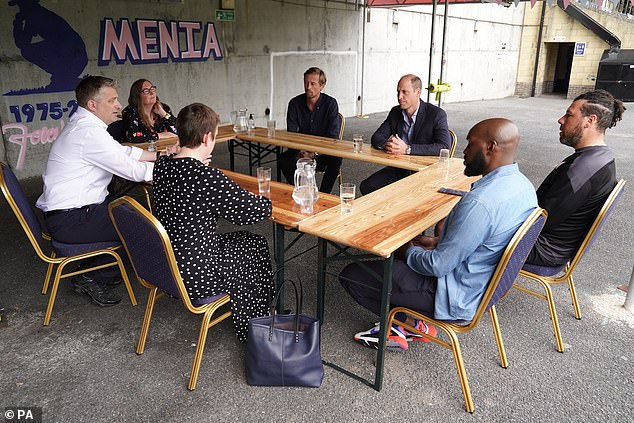 The Duke of Cambridge, 39, visited Dulwich Hamlet Football Club (pictured) in south London, to speak about the Fan Led Review’s review of football governance, which was introduced due to the controversy over the proposed European Premier League.

While at Champion Hill today, William held talks with players, club management and football supporters from a range of teams to discuss the review.

After Conservative MP Tracey Crouch spoke about the independent fan review of the state of football, the Duke, the FA chairman, asked what could be done to improve things.

Telling how she found that some clubs had an excellent relationship with fans but others treated the fans with “disdain” and “disrespect”, he asked: “Is this also why you can’t necessarily run a football club like a company?”

“Because then you miss the point, that heart, soul, and fabric of what a club is, if you work to the bare that finances drive it all?” 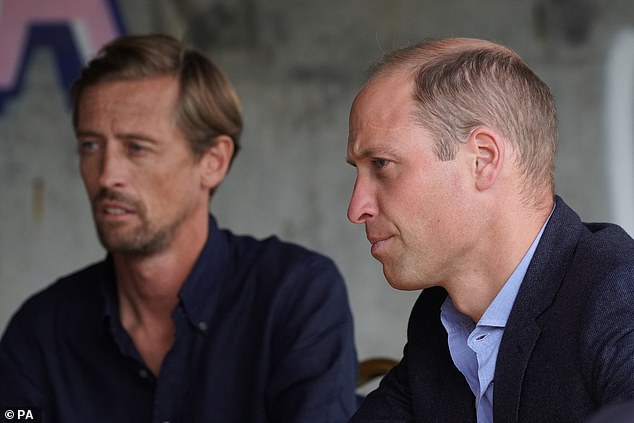 His visit came after he was photographed watching his beloved club Aston Villa face Chelsea at home in west London in the Carabao Cup on Wednesday night, where he was beaten on penalties.

The Duke spent over an hour at Dulwich Hamlet in south London, renowned for its loyal fans and community feel, to hear from fans and players about the ongoing fan-led review of football governance.

The review, chaired by Ms Crouch, was announced in April 2021 and aims to be a comprehensive examination of the English football system and how improvements are being made.

It concerns issues of governance, ownership and financial sustainability of clubs across all levels of football, as well as the controversially abandoned European Premier League. 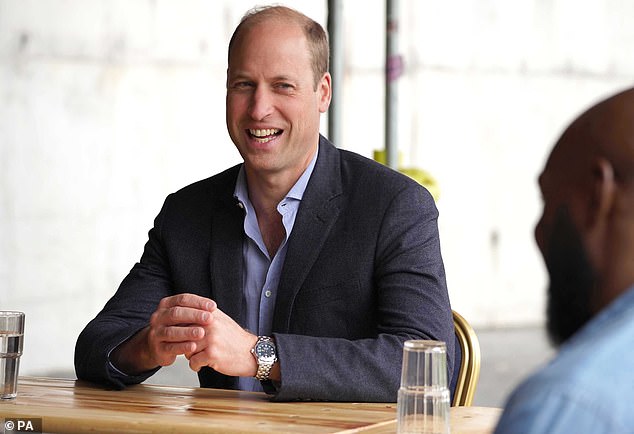 While at Champion Hill today, William (pictured) spoke with players, club management and football supporters from a range of teams to discuss the review. 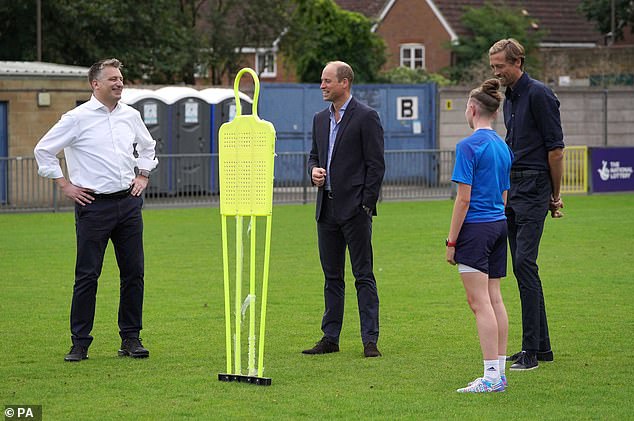 In July 2021, a provisional set of findings and recommendations was released, with Ms Crouch writing to then-Secretary of Culture Oliver Dowden to recommend the introduction of an ‘independent regulator of English football’, with powers to block any future European League.

It outlined proposals to give fans a “golden stake,” giving them veto power over the team’s stadium sale and changes to the team’s name, badge and group colors.

The final report is due to be released this fall.

William was greeted by Chairman Ben Claspear, Crouch applauded his fist and joked, “Last time I saw you eating curry, now you have a proper job!” 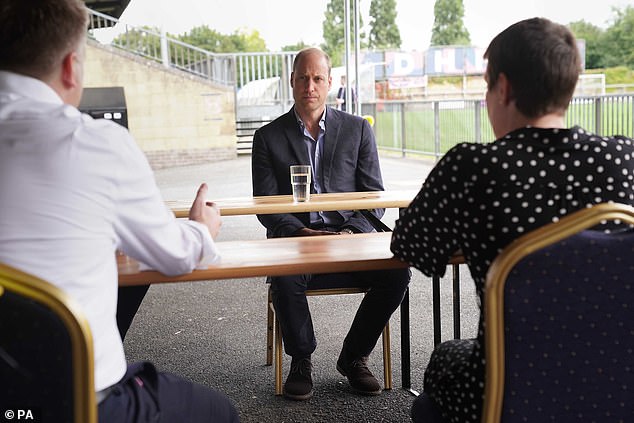 The UK-wide review of the game was announced in April, after six clubs registered in the Premier League and later withdrew from the new European League after fans protested. Pictured, William 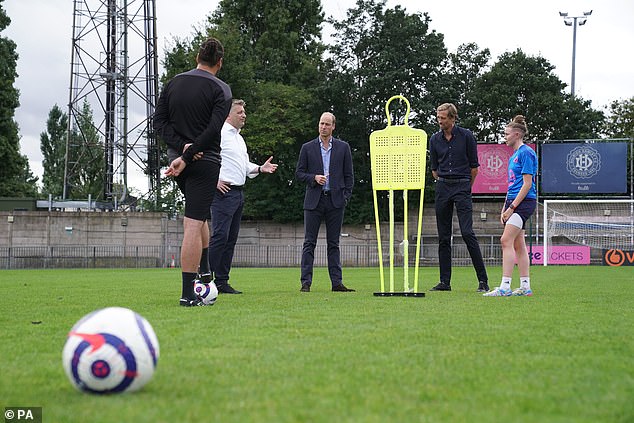 The first results were released in July, after Tracey Crouch and a team of experts spent two months collecting the opinions of supporters, clubs, participants, leaders, academics and administrators as part of the government’s review of fan-led football. Pictured is William with Peter Crouch in the middle

The Duke was introduced to star player Maddie Parsonson, 19, and asked her how she found not being able to train indoors, and how she came to love football when she was a little girl.

He went on to ask the politician about the progress of the official review.

Sitting with coaches and managers at Dulwich Hamlet to hear about the club’s relationship with the fans, William asked: “What model here is working well? What best practices can be replicated elsewhere?”

Telling how the club has kept prices low and now has 2,000 fans for Saturday’s games, he joked about future entertainment: “Crouchie will dance half the time!”

The couple met New York City Mayor Bill de Blasio, 60, and New York Gov. Cathy Hochhol, 63, at the One World Trade Center. No details have been shared about why the royal family is meeting with Democratic lawmakers and what they plan to discuss in advance.

De Blasio’s wife Cherlan McRae, 66, and the couple’s son, Mayor Dante, 24, were also there to welcome the royal couple, who are visiting their home in Montecito, California. 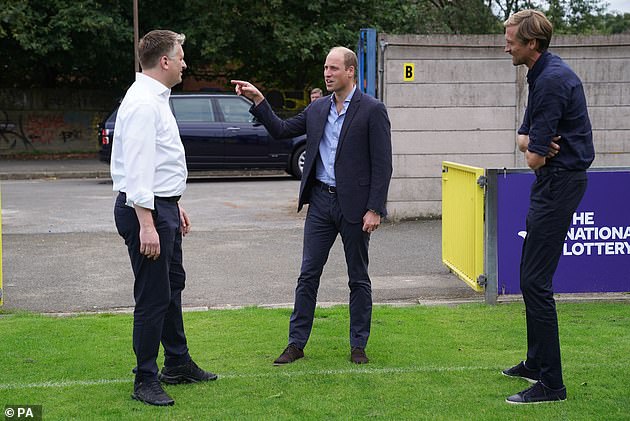 In her interim report, Crouch revealed that she had already reached one certain conclusion: “In order to protect the future of key aspects of our national game, a new independent regulator of English football is needed.” Pictured, Prince William, center 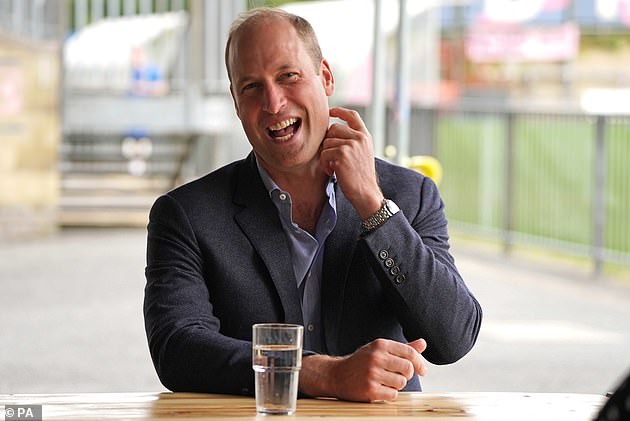 William (pictured), who has been president of the FA since 2006, asked fans what they hope will be included in the final report of the Fan Led review, which will be released in the coming months.