Hulu’s upcoming Pam & Tommy The series may be loaded with debauchery, but it’s also teeming with the love and sweetness of two wildly famous celebrities who fell hard and fast for each other. Yet despite the real story behind the headlines — that there was an unthinkable crime committed and a true invasion of privacy — the public’s main focal point was Pamela Anderson and Tommy Lee’s leaked sex tape, which quickly became one of the most talked about scandals of our lifetime.

“It’s so easy to be drawn in by these big, salacious headlines, or a narrative that’s created by a male-dominated world and media,” Downton Abbey alum Lily James, who plays Anderson, tells TVLine. “We forget what the real story is, or the real people inside of it.”

In the eight-episode limited series (which launched this Wednesday, Feb. 2 with its first three episodes, by weekly installments), Seth Rogen and Evan Goldberg’s biographical drama unravels the truth of what happened, exploring a Hollywood story that very well could ‘ve wound up on American Crime Story. Rogen plays Rand Gauthier, the man responsible for stealing a safe from the titular couple’s mansion and selling copies of the aforementioned tape on a brand new platform called “the Internet.” (Hey, it was the ’90s!) From there, things rapidly spiral out of control, as Pam and Tommy’s lives are turned upside down and the racy footage explodes far beyond Rand’s control.

James spoke with TVLine about her preparation for the role, working with Sebastian Stan (who plays Lee), and the show’s focus on the double-standards, crime and consequences of it all.

TVLINE | Besides the fact that Pamela Anderson is a ’90s icon, what was it about this project that made you want to get on board?
LILY JAMES | Everything. I think she’s just iconic, full stop, and continues to be so. To explore the untold story of what really happened and reframe it looking through our lens now was an amazing challenge. No one really knew what happened — that this was a crime against a newly married couple, and a huge, huge violation of their privacy. We wanted to explore it for the truth of what happened, and also look at the consequences of it — not only immediately at the time, but also how it’s provoked this whole culture of celebrity and the Internet that we now have. And what a surprise that I would be able to play Pamela Anderson in my career.

TVLINE | Your Pam is so spot on. How did you prepare to nail her voice and mannerisms so convincingly?
Well, thank you! I worked really hard. It was such an all-body, all-mind, all-everything transformation where I really got to focus on my physicality. I trained hard with an amazing trainer, and tried to get as athletic and as strong as possible. Then I worked with [dialect coach] Liz Himelstein on my voice. I was watching Pamela’s interviews nonstop, and trying to emulate her behavior and patterns to play her as authentically as I could. There was obviously so much material to go off of. There’s her books, her films, Baywatch [Laughs]… I went deep into the research.

TVLINE | Real talk, though: How much Baywatch did you get through?
A lot! [Laughs] I loved watching Stacked, too, and VIP Stacked was a little later, so that was more just for my enjoyment. But I loved VIP, which she produced and starred in. It was great, and I found it really useful. I feel like there’s not many videos of Pamela, of her interviews and stuff, that I haven’t seen. 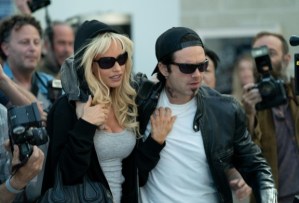 TVLINE | Everyone knows the general headlines, but how does this series portray Pam?
The show looks at what happened and the real-life human consequences. Unfortunately, at the time, it coincided with the birth of the Internet. This was a completely situation. The Internet’s been so a part of my life, but for them to witness this thing suddenly, there was no control and there was nothing in place to support her or protect her. She was let down by the system on so many levels, and I think people miss that. It’s so easy to be drawn in by these big, salacious headlines, or a narrative that’s created by a male-dominated world and media, and we forget what the real story is or the real people inside of it.

TVLINE | The chemistry between you and Sebastian Stan is electric. What were your first meetings with him like, and how was the experience of working together?
It was great! I had only met Sebastian once or twice. We had two afternoons with [director] Craig Gillespie. We talked about the script and made sure we were going through everything with a fine-toothed comb — that everything felt right and was in there for the right reasons, and that we were all on the same page. Sebastian and I felt like custodians of our characters, and really wanted to do right by them and respect them. They’re real people and that was always at the forefront of our minds.

Then we shot the whole job, and he was Tommy Lee from start to finish! It was wild. I think he’s one of the great actors. He’s so impulsive and alive and always unexpected. It was challenging in the right way, and I couldn’t have asked for a better partner. He was so supportive, and we really leaned on each other. Stan had worked with Craig on I, Tonya, so they had such a great relationship already. I was able to piggyback on that energy and trust they already shared, and so it felt like we’d been working together for longer than we actually had.

TVLINE | The fallout from the sex tape’s publication is very different for Pamela than it is for Tommy, and there’s loads of sexism and double-standards involved. I’m not sure if people realized that back then.
A lot of that seems to be a trend that’s happening where we’re looking back at stories and reexamining them, and holding ourselves accountable for reactions and behavior. That’s quite difficult. I think the show asks that of the audience, and that was what I was drawn to when I read the scripts. It was looking at the situation and the truth of it, and realizing those double standards and that sexism that exists where the consequences were far greater for her — and the reaction was harsher, too. We have ignored that for a long time. It’s not right. I think this show is going to potentially provoke that sort of conversation. It feels timely, for sure. 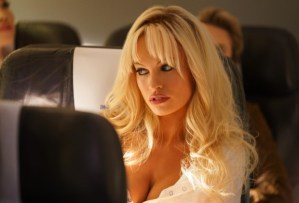 TVLINE | Is there anything in this series you think will surprise viewers?
I really don’t think people know that this tape was literally stolen. It was a crime against a married couple. I think the fact that is not so out there, the fact that this couldn’t be stopped… I think there’s a lot in it that’s surprising. The writers did a really good job at tackling that.

TVLINE | Did you have a favorite moment or scene throughout your time as Pamela?
There’s a couple actually. I loved doing the whole Jay Leno sequence; Lake Bell directed that episode, and we had such a great time. And the Barb Wire stuff… I’m about to go, “And the… And the… And the…!” [Laughs]. But my favorite stuff was with Sebastian. We shot this scene at the end of Episode 2, a completely fictional scene, where you see them at home hanging out and watching TV, and they’re dancing around to The King and I, and it’s so unexpected.

There’s something so sweet about their relationship. That’s a universal thing when you fall in love for the first time, and we tried to mine that feeling of that intense connection and love. I would imagine, especially with the attention of the world breathing down their necks, to have those intensely private moments before they were heartbreakingly robbed from them would intensify that connection even greater. Like it’s them against the world. That was where we went with it, and it was a wonderful scene to shoot.