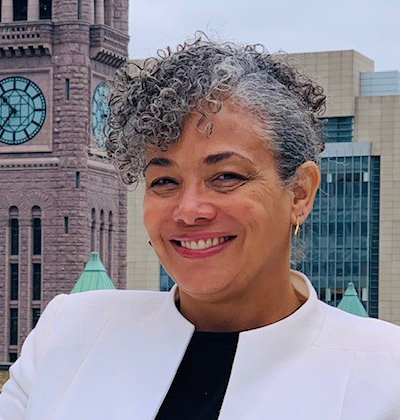 Last week, the Minneapolis City Council approved the appointment of Saray Garnett Hocholi as director of the city’s Division of Regulatory Services.

This makes Garnett-Hochuli responsible for the city’s regulatory arm, which implements ordinances and laws, such as housing and health ordinances, to “A safer, healthier and more inviting city for everyone. ”

In announcing its appointment, the city referred to Regulatory Services as a Department of City Hall that will focus on anti-racism issues — taking the approach that reducing disparities in Minneapolis is not just a political goal but a regulatory mission.

Garnett-Hochuli spoke with MinnPost about this approach and its goals for the department and city. This interview took place over two conversations and has been edited for length and clarity.

MinnPost: Congratulations on the new post. But you’ve been in the department for a while, right?

Saray Garnet Hocholi: Thank you. I was temporary for six months. I was a deputy for about 18 months. So, I worked with the department for two years in October.

MP: Along with announcing your appointment has been approved by the City Council, came the details of some of your goals as department head, which included anti-racism and fairness initiatives. The city appears to see regulatory services, such as health and housing law enforcement, as a way to achieve reductions in inequality. Can you explain this approach?

SGH: It started before me, two or three directors ago, really talking about equality and inclusion, that is, diversity. Two years ago, I think in 2015-2016, the city, in our performance reviews, started talking about a commitment to integrating cultural resilience into our performance evaluations.

I will quote Abram X Kennedy, who wrote that racial inequality is the problem of bad politics, not bad people. He also says that the real anti-racism is when people are allowed to be themselves, to be their imperfect selves. I got goosebumps reading this to myself because for years I’ve straightened my hair to be a pro. I didn’t know I had curly hair until COVID because I just didn’t care anymore. I’ll be all mine. And I’m very good. And I have a lot to offer. I will no longer be complicit in this racist regime.

Now, bring that into the government. I am now the Director of Regulatory Services. The Policies We Set and Implement, Are They Harming? Are you based on a racist policy? Do we help or harm?

Let’s look at our rental policies first: 51% of our residents are renters now. A large proportion of this population is BIPOC (black, indigenous and coloured). Do they live in safe, healthy and stable homes? The answers should be: yes, yes, and yes.

This is our job when we look at regulations. How do we deal with the tenant? Instead of saying ‘owner’ or ‘tenant’, we now say ‘property owner’ and ‘tenant’. Minneapolis has terrible statistics about disparities over who owns and who rents. So why should a tenant be treated less than they don’t have? And why should a tenant live in a substandard property? This is where we come in.

We look at our policies, how we interact with society, and how our policies and practices harm or harm. We are trying to change that. As our city diversifies, as we continue to grow in our Minneapolis 2040 plan, as we try to get more people to live in this city after George Floyd, we have work to do, okay?

When I talk about unconditional property rights – this is for our residents and my employees. We can also look at city employees and see that we don’t have a really good diversity of our employees, not just black or white, but all bodies, all races. This also applies to mid-level management and leadership positions…

We’ve just hired Team Dynamics (a leadership development company focused on racial justice and organizational culture change) to help us double our level of being an anti-racist environment. … These things and ways of being affect how we appear in society and are organized. And when it comes to getting long-term compliance from the population, it’s through education, not sanctions. I’ll let you know the first time, one hopes that will take. Now, if we educate you and you make a conscious decision not to follow the rules, that’s a different story. I am not responsible for people’s bad decisions. What I am responsible for is that you understand the reason behind the policies.

We have set up a whole team of tenants and housing coordinators to help people when we come into a house and there are problems. Its alternative application: How can we help you comply without disturbing or harming you?

MP: What is an example of regulatory services causing harm?

SGHPolicies and ordinances are in the books for a reason: they keep people safe and healthy. In the past, suppose we entered a house: the tenant calls and complains about inappropriate housing, that the heat does not work, the toilets and water do not work. We get there and the house is in disarray and he must be convicted. In the past, we’d plaster the building and say to the tenants, “The building is doomed, find out.”

Because of our first tenant policies, we’re now saying that a homeowner is moving that tenant for not keeping up with the end of the bargain. The tenant is now offered a three-month stipend that will cover his rent on another property. We help them connect them with resources, we make sure they understand their rights, we teach them that it’s not their fault but that they can’t live here.

Now, we’re saying we have to look at the whole picture. We do things to work proactively with property owners and managers to make sure they understand what their obligations are.

MP: So, since the majority of the population is tenants, and because a large portion of that population is people of color, something like implementing the Housing Act should include anti-racism and egalitarian work?

SGH: Yes, but let’s dig deeper. Beyond this act of understanding who a renter is usually or traditionally – I would say, when I was growing up, the goal was to own a home. Being a charterer, at least in Minneapolis and Minnesota, was a bummer. I lived all over the country: outside the East, this is nothing. But Minnesota is different.

So, when we’re dealing with those… well, I don’t want to say “these populations.” No, “these residents”. Look, this is the anti-racist culture I was talking about. It comes down to the language we use.

When one finds oneself in a position with the regulatory services, and one is not a white body, we have to be aware of how we talk to people, how we support and know their cultural background, when we work with people.

Beyond the piece of law and language, there is the human piece. That’s why we say we do our work in a human-centered way and put the person first. No matter who you are, because, like I said, it’s the policies I enforce that do them harm. If these policies are racist in nature and hurt people, we need to have these conversations.

MP: What about other regulatory areas, such as animal control and traffic control?

SGH: We can not say that each section has a separate approach. If we really treat everyone as they are and don’t assume they’re bad because they’re Native American or black, or that they come with this historical baggage, that’s not who they are.

We must be aware of our unconscious biases when we interact with people. For example, you have a traffic control agent, and there is an incident with a white woman who has two children running to the parking meter. Do you give her a pass and not pass it? If you see a black woman running up to a meter counter, do you issue the ticket or do you reciprocate?

These are the things we are talking about. Where is the blessing? Yes, we have to follow our regulatory standards. But do we really treat people equally based on the situation? Or are we unconsciously… being organized because of the person and not the event? If we say, no matter who he is, we’ll issue the ticket because you didn’t pay the meter and were ten minutes late. This is good. We cannot pick and choose.

MP: What consistency issues are there in your animal control app that you hope to reduce? Is this enforcement always just?

SGH: I grew up in Northside, 55411 is my zip code when I grew up. When you think of 55,411, you think of negative things: poor, possibly uneducated, single motherhood, all of those things. Assuming assumptions, we go in and execute in a certain way, because you live in 55411 and you’re nobody, and you got a quote because your weave is too long. That’s why we have data analysts looking at how our citations are issued. Do we do it equally and in the same ways in every wing? These are the things we consciously look at now in a way we did not do in the past.

MP: With the city’s regulatory services seen as a natural setting for equity initiatives, does that clash with other departments, such as civil rights?

SGH: In the past, I’d say that every department has a demand or goal to combat racism and it’s up to managers to push it forward. Kim (Keller, former Director of Regulatory Services) was an amazing leader. I’m the first black leader of Regulatory Services, and so I see things in a different context because I’ve been on the mischievous end of certain things, so I understand I don’t want that to anyone behind me no matter what position you’re in. You should be seen what you bring to the table. Not what I don’t think you bring to the table.

As the city progresses, we all know that the whole organization has to connect the dots and do the work. So, the HR department is driving a few things. Regulatory services of course work with civil rights, and I think a lot of other managers are working with the Office of Race and Equity to make sure we do that work.

But the regulatory services have been doing that for a longer time and we’re setting the framework for that work. We drive it. But that’s because our employees and our leaders said that’s what we should do. Not what we ought to do, what we ought to do.

I imagine, as we go forward, the gaps will close. The pandemic and the killing of George Floyd were commonplace. Unfortunately, it was a stepping stone for us to move the dialogue forward.