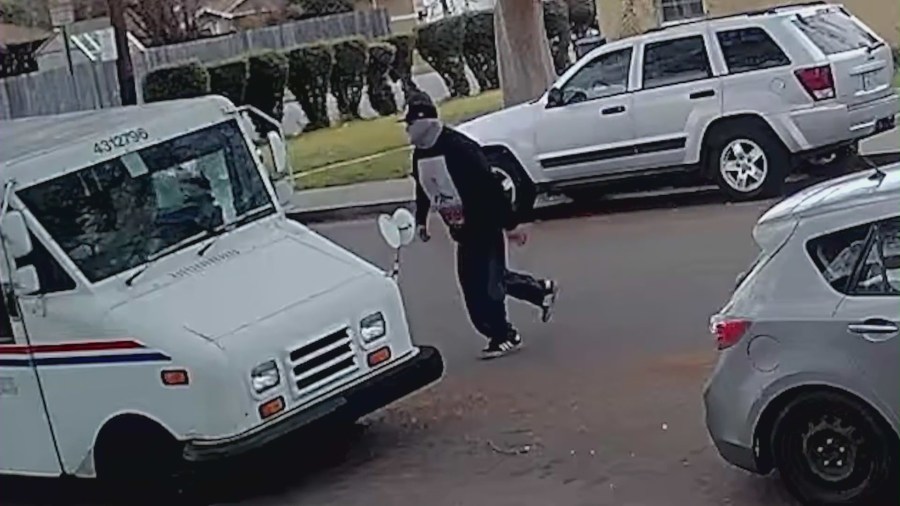 A man was caught on camera throwing an object at a USPS delivery vehicle in Pomona on Saturday, and stealing a box of mail before making off.

“I’ve been here 20 years and I’ve never seen something like this happen ever,” Pomona resident Ralph Gonzalez told KTLA.

Neighbors say the mail theft occurred around 9 am Saturday while a US Postal Service mail carrier made his deliveries along Westwood Place.

“It’s very surprising, especially for it to happen in the middle of the day like that or in the morning in broad daylight,” James Miller, who lives nearby, said.

The incident was captured on a neighbor’s surveillance camera. A man could be seen exiting his car from the passenger side, looking to see if anyone is around, and then hurling an object at the window of the USPS vehicle, shattering the glass.

The man then reaches in and takes off with a box full of mail before someone else inside the car drivers off in what appears to be a silver hatchback.

“I heard a knock on my door and I answered it. It was my mailman,” Miller recalled. “He told me that somebody had broken into his truck just a few minutes prior. So I went out to look and there was a bunch of glass on the ground.”

By the time Miller came out, the suspect was gone and the vehicle already vandalized.

In a statement to KTLA, USPS said postal inspectors are actively investigating any reports of break-ins in the area.

Pomona police are also investigating and say they have spoken to the mail carrier.

Anyone with information is asked to contact the Pomona Police Department.