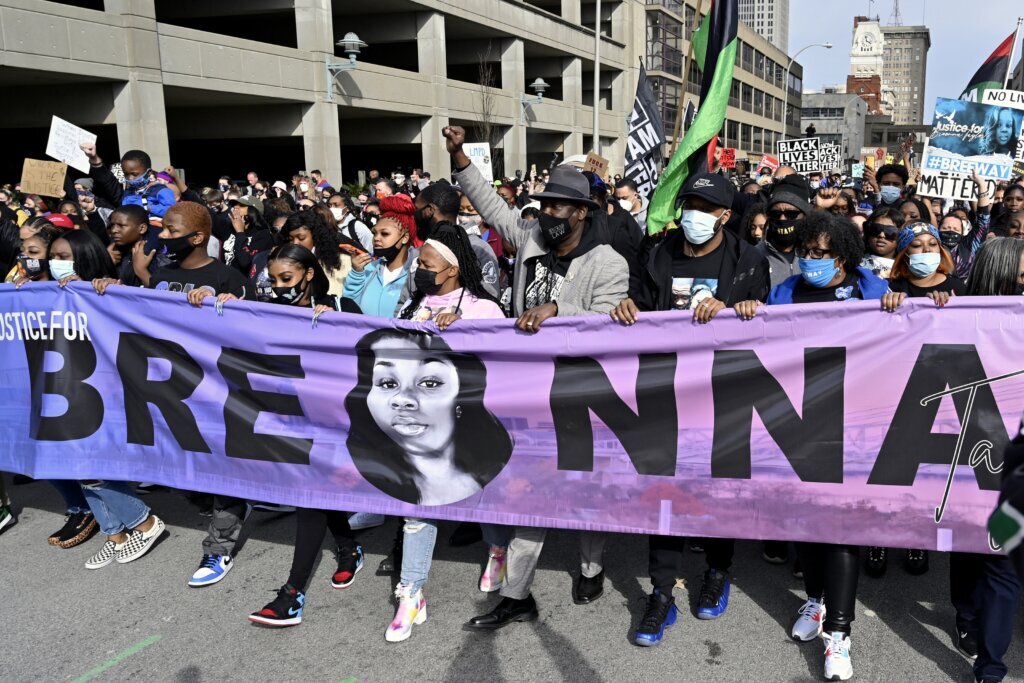 Brett Hankison is standing trial on three counts of wanton endangerment for allegedly firing wildly into Taylor’s neighbors’ apartments in March 2020. Taylor, a Black woman, was shot multiple times during the raid. No drugs were found, and the warrant was later found to be flawed.

No officers were charged for their role in causing Taylor’s death, despite protests throughout, with many demonstrators demanding that the involved stand trial for the murder. That set the outcome apart from two other cases that put race relations in the national spotlight in 2020 with the killing of Black people at the hands of white people: the death of George Floyd in Minneapolis in the custody of a police officer and the Georgia shooting of Ahmaud Arbery. The 25-year-old Black man was shot to death while being chased by three white men while out jogging through a neighborhood.

The three white men who pursued Arbery were convicted of murder in November and given life prison sentences in early January. Last year, former Minneapolis Officer Derek Chauvin was convicted of murder and manslaughter in state court in the videotaped killing of Floyd.

In the Taylor case, Kentucky’s Republican Attorney General, Daniel Cameron determined that the officers fired into the woman’s apartment in self-defense after her boyfriend, who was in the apartment with her, shot at them first. Cameron, who is Black, did not give a grand jury considering the case the option of charging those officers in connection with Taylor’s death, though he acknowledged that her death was heartbreaking.

Hankison is the only officer facing any criminal charges from the incident. If convicted, he faces one to five years in prison for each of the wanton endangerment counts.

The process, which began last Friday, is expected to take weeks. Potential jurors will be asked questions to determine if they can serve as fair and impartial jurors. The pool, which consists of Jefferson County residents, will be whittled down to a group that consists of 12 jurors and alternates.

The trial is taking place in Louisville despite a request from Hankison’s attorney, who had asked Jefferson Circuit Judge Ann Bailey Smith to move the trial out of the city because he felt the publicity surrounding the case would make it hard to seat an impartial jury. Smith denied the request.

Hankison has pleaded not guilty to the charges.

Hudspeth Blackburn is a corps member for The Associated Press/Report for America Statehouse News Initiative. Report for America is a nonprofit national service program that places in local newsrooms to report on undercovered issues.

Copyright © 2022 The Associated Press. All rights reserved. This material may not be published, broadcast, written or redistributed.