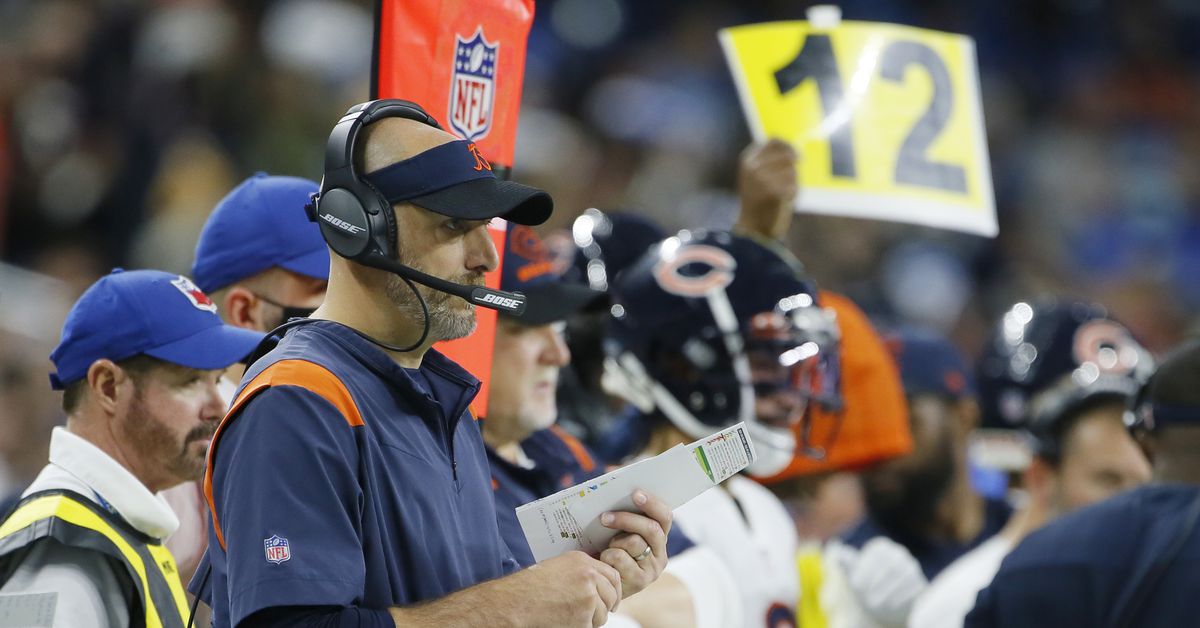 For Matt Nagy, the joy of victory is all that matters

After a tumultuous and chaotic week at Hallas Hall, the Bears rallied around their beleaguered coach Thursday at Ford Field – barely shrieked by a undefeated Lions who at times seemed to be trying more to lose than win.

But Matt Nagy will take it. A win is a win, and Nagy gladly accepted the Bears’ 16-14 win over the Lions at Santos Cairo’s 28-yard field goal with time out as a show of support in a time of uncertainty.

“I do, not just me,” Nagy said. “The other part of this too is Ryan [general manager Ryan Pace] And as I do this thing together, they all rallied around us – not just me and the coaches. In the world of coaching, you have assistant coaches, so we’re all part of that thing. And we’re all working together here and I think that’s impressive.”

A shaky victory was unlikely to change the rules of the game for Nagy. But he’s so focused on the moment—thanks to him, but probably because of a mistake—that it just doesn’t matter. His team won Thursday. He was not expelled.

“No, it’s just joy,” Nagy said. “The biggest part for me – and I’m not built that way on being selfish – is about the team. That’s selfless for them. These guys are the ones who practice every day to fight like hell to win.

“It’s hard. You either win or you lose in this league. We’ve had two close in the last two weeks. It’s a big difference if you win it. We didn’t. But we won today. You can’t take that away from these guys. There’s joy in the locker room. Those clothes. They’re going to have a great Thanksgiving today because they got it and fought like hell. They told me they’d do it and they did. How cool?”

That was the gist of the players’ message, however, when midfielder Andy Dalton, midfielder Roquan Smith and other leaders spoke at the team’s meeting on Wednesday.

“It’s something we’ll probably keep for the team,” Dalton said. “Matt wanted me to say something. And I did. And I just spoke from my heart.”

Cole Kumit said the idea was to win for Naji. But overcoming the distractions of the misrepresentation on Thursday that Nagy would be his last game as coach – and the firestorm that followed – was the most appreciative of the respect they had for their coach.

“I think ultimately we did this to ourselves – as players, as a team, with co-coaches and just an organization in general,” Kemet said.

As for Nagy, his stature as Bears coach persists day in and day out. And publicly at least, he seems to be good at it. He spoke with Bears President George McCaskey and President Ted Phillips after the hype over the report of his impending dismissal. But he did not say whether his future was discussed at that meeting. All he wanted to know, he said, was that the shooting report wasn’t true.

“I think everyone can understand [that] He said: This is an internal discussion we had. But the bulk of that discussion was [the report]. The next part is to make sure there isn’t too much distraction to take away from the practice. you did not. This is so. That’s what it was.”

Nagy’s job status will remain an issue until McAskie and Phillips somehow clarify it. But Nagy only seemed interested in beating the Cardinals next week.

“What I understand, which is what it has been like since the day I fell for it [the Bears’] Nagy said, “The coach is to win as many games as you can and win the right way. When you lose five games in a row, you understand, and when you’re 3-7, you know that’s the zone you can get into. That comes with the job.”


Hals report the intrigue of bears

Expert analysis and reporting before and after every game by the Bears, from the journalists who’ve covered Monsters of the Midway best.