June Brown led the celebrity tributes to EastEnders star Leonard Fenton on Monday after the news broke that he passed away on Saturday aged 95.

Leonard, who played Dr Harold Legg in the BBC soap, appeared in the first episode in February 1985, with his last scenes airing in 2019.

Several of his scenes were with June, as his character was a close friend of Dot Cotton, who entertained her hypochondria and seemingly endless list of ailments. 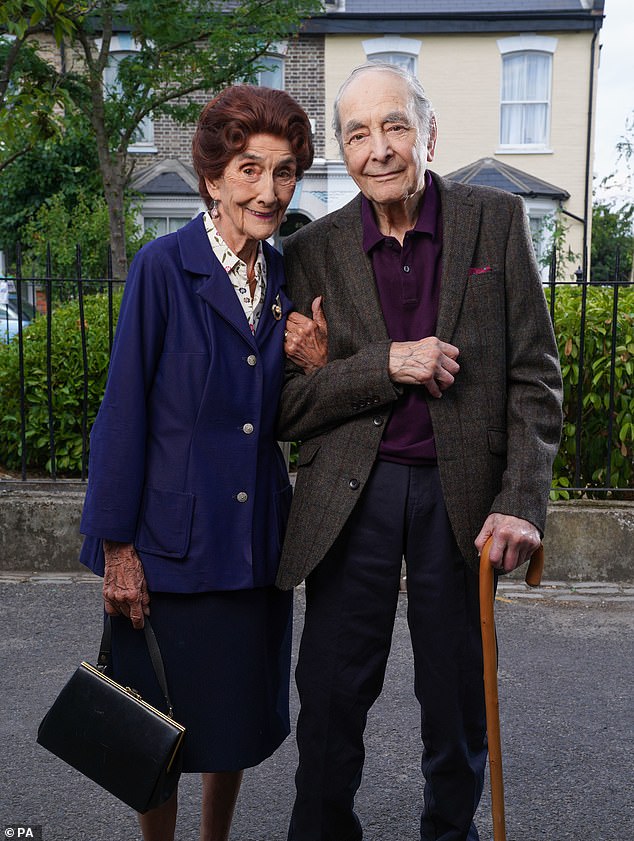 ‘He was a charming man in all ways’: EastEnders’ June Brown led tributes to ‘polite and kind’ co-star Leonard Fenton after the Dr Legg star died aged 95 (pictured on set in 2019)

June, 91, described her former co-star as a ‘charming and kind’ man as she penned a heartfelt tribute to her co-star.

She wrote: ‘I first met Leonard as Dr Legg when I joined the cast of EastEnders as Dot, his hypochondriac patient, in 1985.

‘He was a charming man in all ways, first as a person and then as an actor, extremely polite and kind.

‘I enjoyed working with him enormously for many years and missed him when he retired.’ 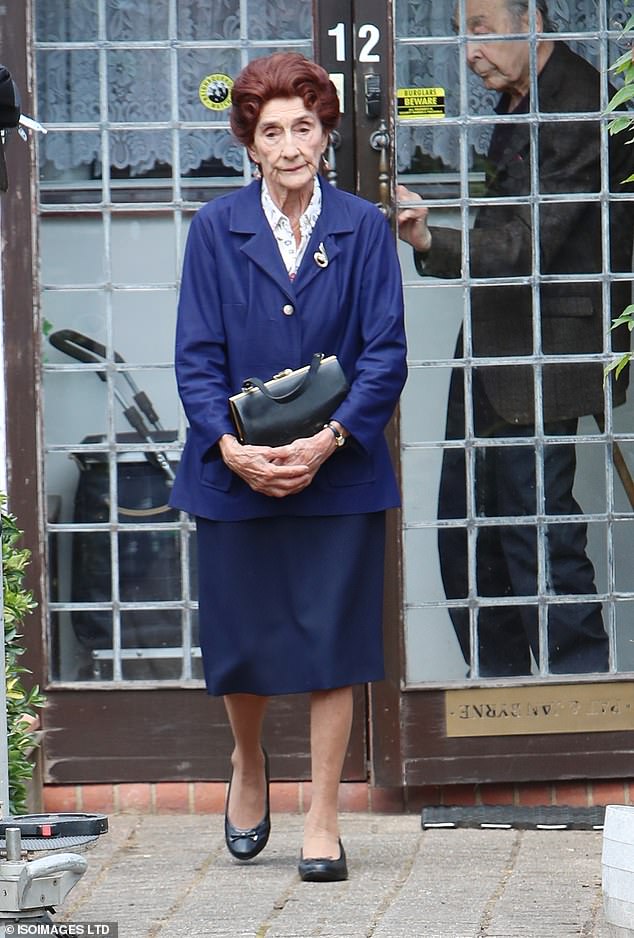 Close co-star: Several of his scenes were with June, as his character was a close friend of Dot Cotton, who entertained her hypochondria and seemingly endless list of ailments (pictured filming their last scenes together in 2019) 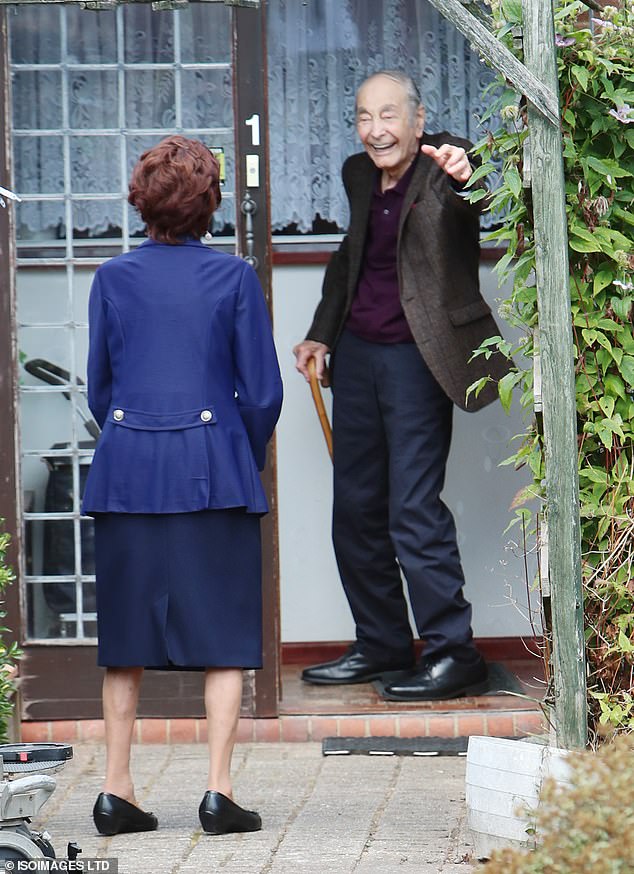 Lovely: June, 91, described her former co-star as a ‘charming and kind’ man as she penned a heartfelt tribute to her co-star

Dr Legg was written out of the soap in emotional scenes which aired in 2019, after he had returned to tell Dot that he had terminal cancer.

Referencing their final scenes together, June concluded: ‘I was glad that I’d been with him for his last scene with Dot at his bedside and my thoughts are with his devoted family.’

Natalie Cassidy, who played Sonia Fowler in the soap, also paid tribute, releasing a statement that read: ‘I had the pleasure to work with Leonard. He was utterly charming, constantly joked with me and loved talking about his past.

‘I feel honored that our paths crossed. My thoughts are with his family at this sad time.’ 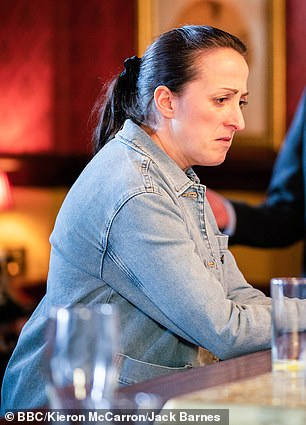 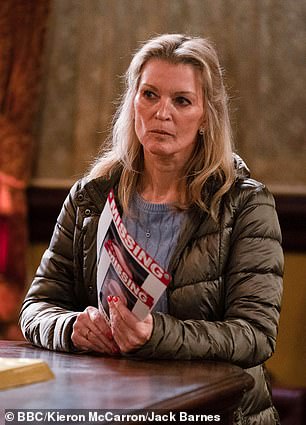 Heartbroken: Natalie Cassidy (left) who played Sonia Fowler in the soap and Gillian Taylforth (right) who played Kathy Beale both touched on the late star’s charm and good stories 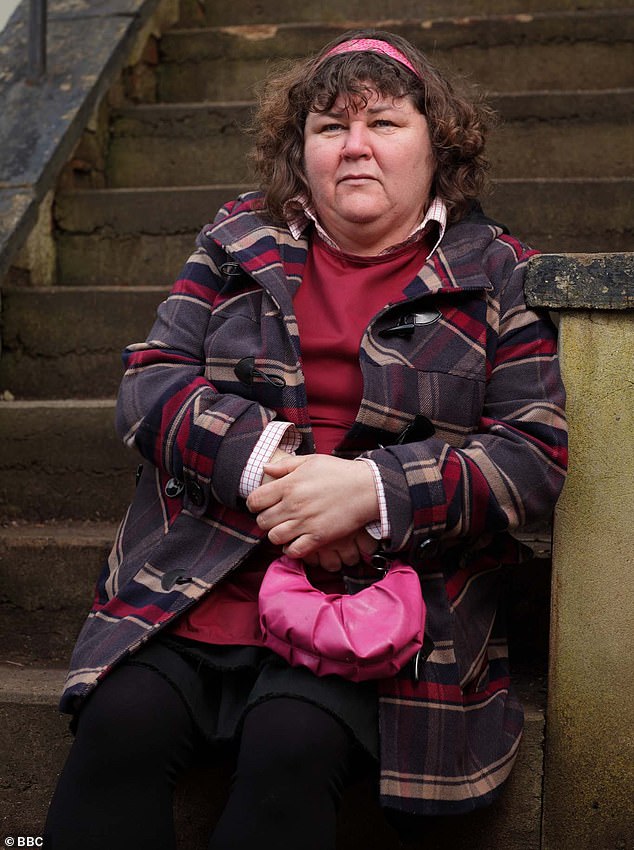 Gillian Taylforth (Kathy Beale) said: ‘I’m so sorry to hear the very sad news about Leonard. He was a lovely, charming man who was so kind and always told the most wonderful stories.

‘I send my love and condolences to his family. RIP dear Leonard.’

Leonard was best known for playing Walford’s original GP, appearing on the BBC soap from its very first episode in 1985, until his character was killed off in 2019. 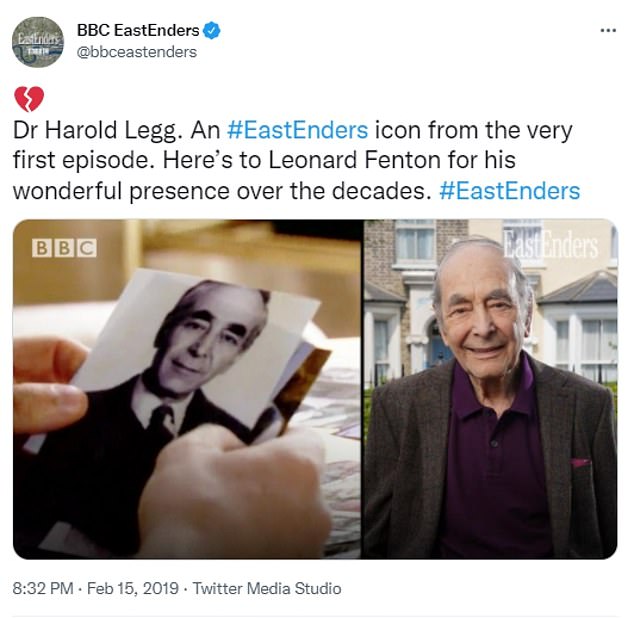 Tragic loss: Following the news of his passing, EastEnders paid tribute to Leonard on the soap’s official social media channel 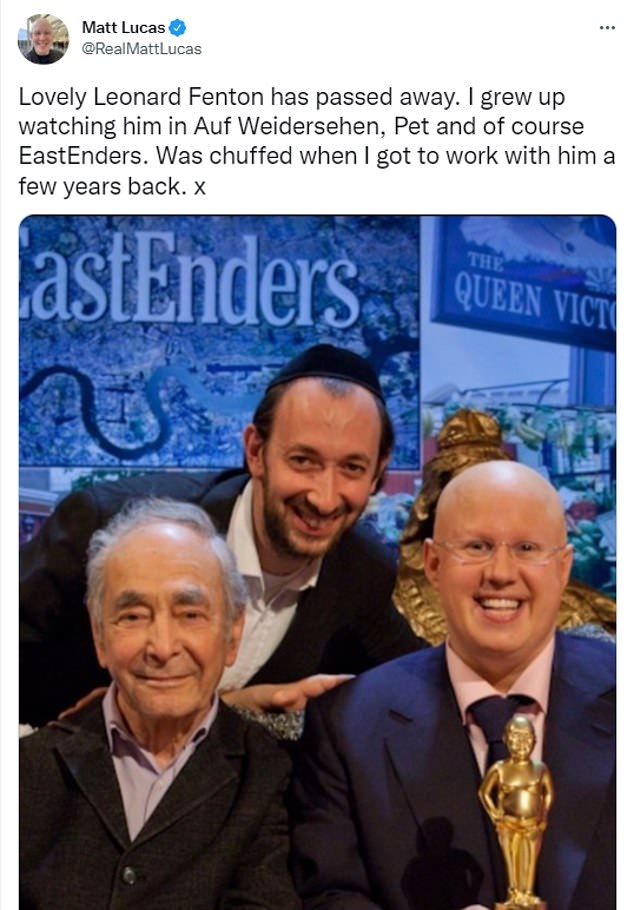 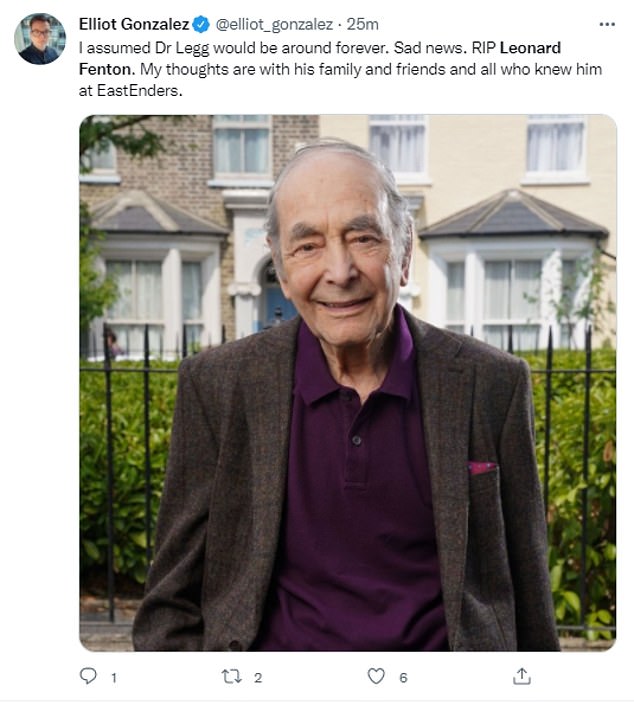 Paying their respects: Tributes poured in for the actor after his death was announced on Monday

His death was announced by his family on Monday afternoon in a statement that read: ‘The family of the actor Leonard Fenton are heartbroken to announce his death at the age of 95 on Saturday January 29.

It continued: ‘He worked in TV and film and his long stage career included time at the National Theater and most recently the Royal Shakespeare Company.

‘He felt privileged to have worked with some of the greats of the theater, including Samuel Beckett, Orson Welles and Jonathan Miller.’

The statement concluded: ‘His passion for painting and singing pre-dated his acting career and was equally as important to him. He will be missed beyond words by his family.

‘We feel incredibly lucky to have been able to be with him as his health worsened towards the end – a privilege denied to so many during these tough times.’

An EastEnders spokesperson added: ‘We are deeply saddened to hear that Leonard has passed away. 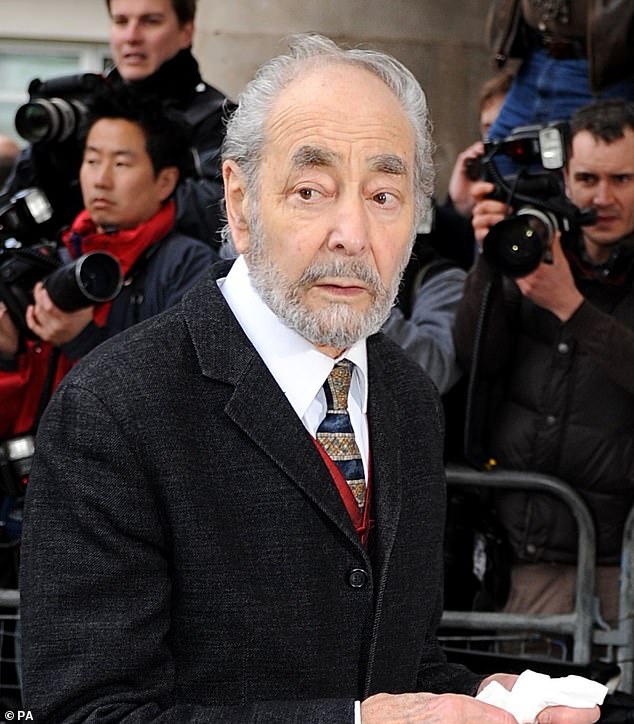 A statement from his family read: ‘He will be missed beyond words by his family. ‘We feel incredibly lucky to have been able to be with him as his health worsened towards the end’ (pictured in 2009)

‘Since appearing in the very first episode of EastEnders, Leonard created a truly iconic character in Doctor Legg who will always be remembered. Our love and thoughts are with Leonard’s family and friends.’

His career in acting spanned over fifty years and saw him appear in a total of 267 episodes of EastEnders.

Leonard and his wife, cellist Madeline Thorner, had four children together.

The EastEnders Twitter account marked the actor’s passing, posting: ‘Dr Harold Legg. An #EastEnders icon from the very first episode. Here’s to Leonard Fenton for his wonderful presence over the decades. #EastEnders.’ 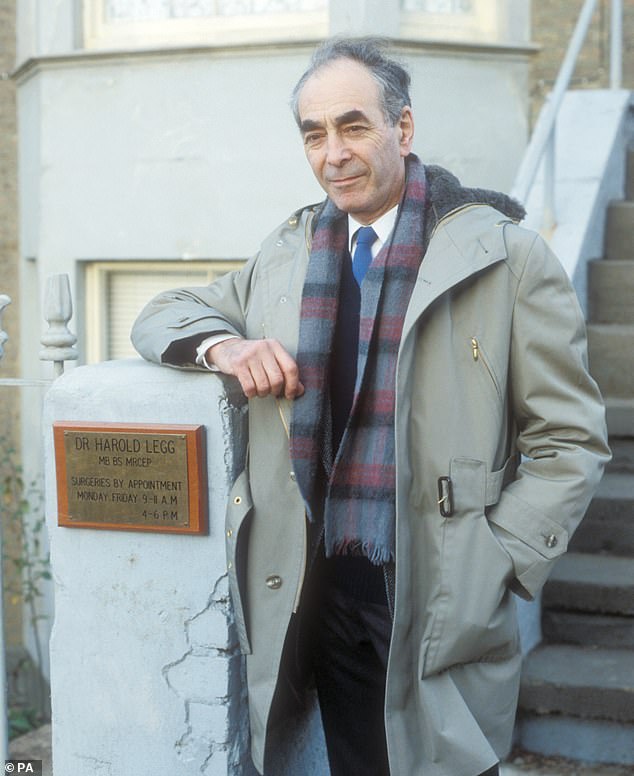 First appearance: Leonard quickly became a favorite fan when he appeared in the Square as one of the original 23 characters invented by the creators of EastEnders

Leonard’s character was killed off on EastEnders in 2019, with the emotional storyline seeing him lose his battle with pancreatic cancer.

Harold had returned to Albert Square to spend his final moments with none other than his longtime friend Dot.

Dot realised the end was in sight for Dr Legg when he was brought back to the square and she saw the frail state he was in.

Sharing touching moments as Harold drifted away, the doctor held his father’s pendant in his hand before his grip loosened and he passed away.

One of the show’s original characters, Leonard portrayed the medical doctor in regular and recurring roles up until 1997, before appearing in short cameos in the early 2000s.

Gushing over his surprising return, the star said: ‘I am very happy to be back at EastEnders and am looking forward to working with June and the rest of the cast and crew again.’ 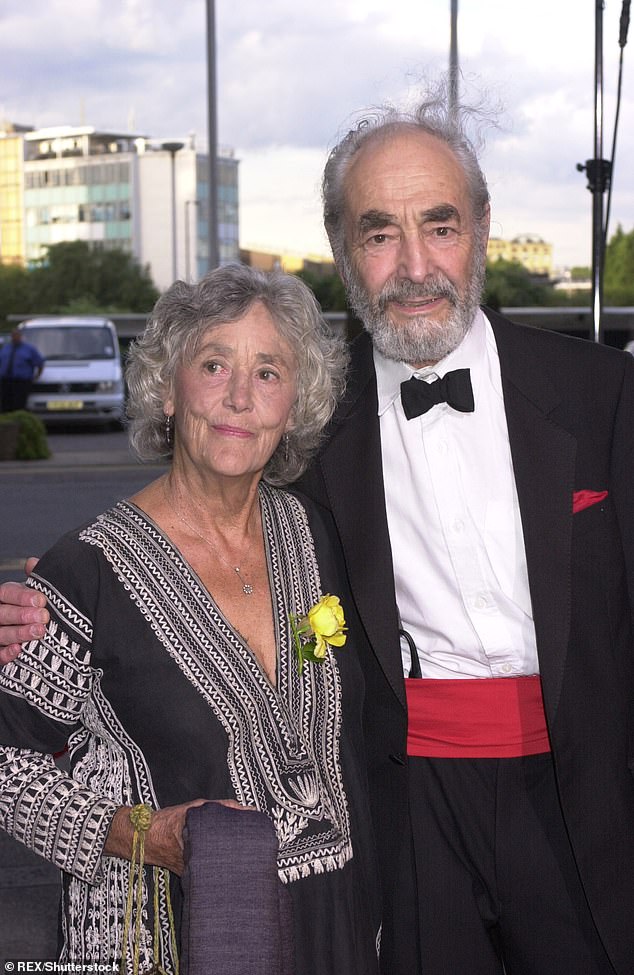 Happier times: Leonard and his wife, cellist Madeline Thorner, had four children together (pictured in 2001)

Raised in east London, Leonard trained to be a civil engineer at King’s College London and worked as an army engineer during World War II, and continued to do for five years after until he decided to pursue acting.

Leonard was awarded a scholarship to London’s prestigious Webber Douglas Academy of Dramatic Art and went to forge a successful acting career spanning over fifty years.

As well as his EastEnders role, the actor also appeared in films such as Robin Hood Junior (1975), Give My Regards to Broad Street (1984), and the British horror movie The Zombie Diaries (2006).

In December 2004, at the age of 78, Leonard made his directorial debut with After Chekhov, which was performed in the Soho Theater Studio. 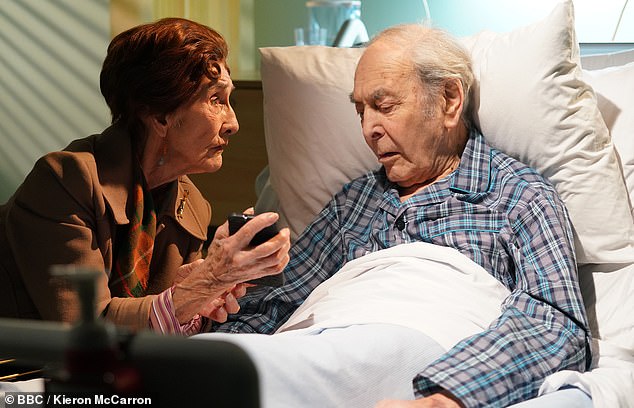 Emotional scenes: Leonard’s character was killed off from EastEnders in 2019 as he lost his battle with pancreatic cancer in the soap