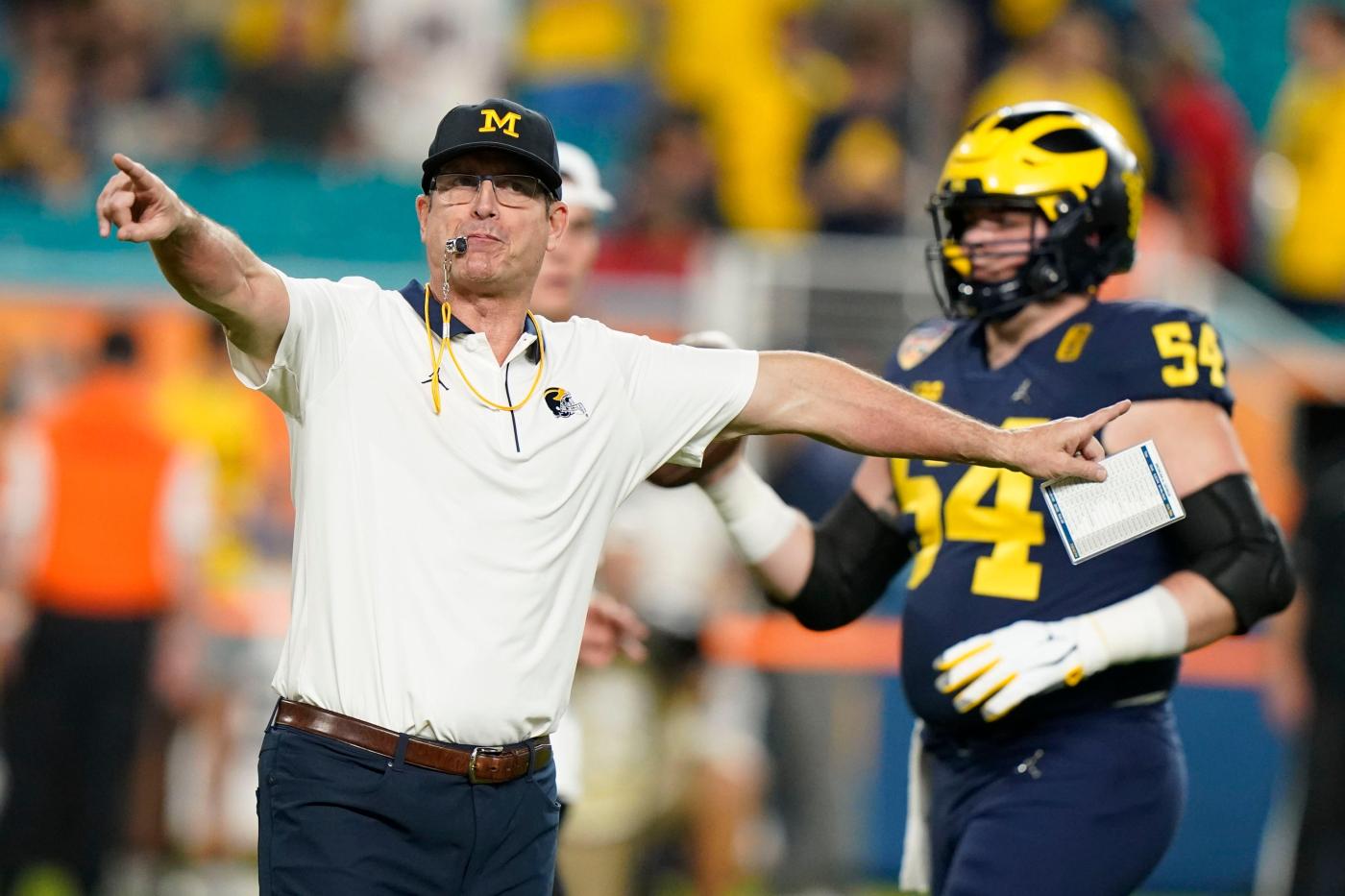 The sentiment in the NFL is not if, but when will Jim Harbaugh return to the league?

And that raises the question about what team and what situation is right for the University of Michigan coach?

Harbaugh has reportedly wrapped up an interview with the Minnesota Vikings, who recently hired Kwesi Adofo-Mensah — who once worked with Harbaugh in San Francisco and was the 49ers’ manager of football research and development — as the team’s new general manager.

Whether Harbaugh, who led the 49ers to a 44-19-1 record in four seasons and took them to a Super Bowl in his second year, would accept the job if offered is unclear.

According to league sources, there has also been some level of communication with the Miami Dolphins, who are owned by Steve Ross, who happens to be one of the University of Michigan’s biggest boosters. But Harbaugh has not formally interviewed for the Dolphins job.

Ross and Harbaugh have a relationship, and the Dolphins owner previously stated that if an NFL team lured Harbaugh from Michigan it wasn’t going to be Miami.

But with Harbaugh seriously considering making a move to the pros, which would certainly pay him more than the $4 million annual salary he’s slated to make with the Wolverines each of the next four seasons, the prevailing thought is that Ross will make a second effort to land one of his favorite coaches.

The Dolphins previously pursued Harbaugh before the 2011 season, when Harbaugh was leaving Stanford for an NFL job. But Harbaugh chose the 49ers and Ross’ pursuit of the former NFL starting quarterback created an embarrassing situation, considering Miami hadn’t fired yet Tony Sparano.

The pursuit of Harbaugh created a rift between Sparano and then-general manager Jeff Ireland, who coached 13 games that season before being fired, and eventually replaced by Joe Philbin.

Ross, and any other teams pursuing Harbaugh, would likely have to make him one of the NFL’s highest-paid coaches — and presumably give him full control of football operations.

The Dolphins fired Brian Flores at the conclusion of his third season and retained general manager Chris Grier. But Grier’s ego-less persona likely won’t make it difficult for him to work with Harbaugh, who left the 49ers despite never producing a losing season, because of issues with management.

The Dolphins, who have had just seven winning seasons and three postseason appearances in the past two decades, are being extremely secretive about their coaching search.

The sentiment around the NFL is that the three-week-old search for Flores’ replacement isn’t going well.

Bills offensive coordinator Brian Daboll, who was viewed the front-runner to replace Flores by reports, accepted the New York Giants head coach position before Miami began its second round of in-person interviews.

Ross typically prefers to hire young and hungry coaches, and that has led to him hiring three straight former assistants who possessed no head coaching experience.

Harbaugh likely won’t have those issues. While he’s known as for having a quirky personality, his body of work and experience would likely help him assemble a quality coaching staff.

According to a league source, Harbaugh has held surface-level conversations with a few assistants he’d be interested in hiring if he did return to the NFL.

However, it’s understood he’s not a lock for a return this season because there are seemingly some concerns that the Vikings and Dolphins might not be the right fit for him.

The 58-year-old Harbaugh, who won AP Coach of the year, is coming off his best season at his alma mater. The Wolverines finally beat arch-rival Ohio State, winning the school’s first Big Ten title in 17 years, and made the College Football Playoff.

In his seven years at Michigan, Harbaugh has gone 61-24 (.718), but he hasn’t led the program to prominence like expected.

It is possible that a re-worked deal with Michigan, which trimmed his $8 million a year salary in half in 2021, could deter him from making the jump back to the NFL.