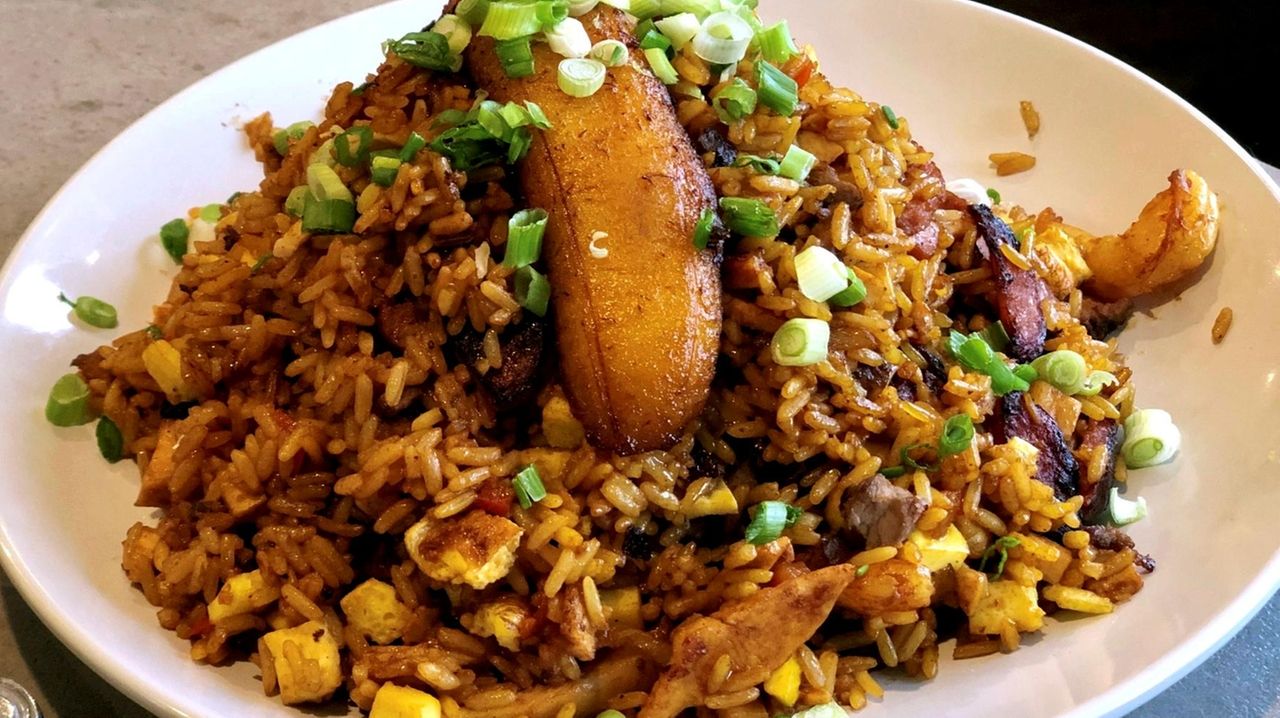 In the process of sweeping fried rice across the globe, the Ecuadorean spin is particularly epic: short-grain rice soaked in stock thickly with chunks of charred sausage, chicken, shrimp, eggs, peas, onions, peppers, and tomatoes….

“I had it almost every week when I was little,” Yvonne Castro said of the sholavan rice that her father, chef Louis Marin, used to cook for her. Marin, who spent 27 years as a chef at Painters Restaurant in Brookhaven, cooked American dishes at work — burgers, steaks and pasta — while at home, cooking the Ecuadorean fare he learned from his family.

Both American and Ecuadorean cuisines are woven together at Patchogue’s Tiesto Restaurant, which Marin, Castro and her sister Jessica Marin opened earlier this fall in the space that formerly housed the Blue Goose. “He always dreamed of this dream,” Castro said of her father, who opened his own place.

Castro began working on buses as a teenager, and has spent her career in the restaurant industry. She and her sister now work in multiple roles at home at Tiesto, where the menu is a mix of gastropub fare with Mexican, Spanish and Ecuadorean dishes. Marine in the kitchen, preparing stacks of Chulavan rice — plus empanadas, shrimp ceviche, arroz con pollo (chicken with rice) and Ecuadorean-style churrasco steak — served alongside more traditional American fare.

The family first saw the East Main Street space before COVID arrived, delaying their plans; They didn’t close the deal until earlier this year. “The Ecuadorean community here is very large,” Castro said, explaining their desire to open up in Patchogue.

The space still carries the look of its previous occupant, with rustic navy blue wood and the same curved faucets. A long cocktail list goes from the house of Testo’s margaritas (made with agave syrup and tequila mixed with several berries) to another with a tagine edge, as well as a spin on mojitos, frozen drinks, and a martini and paloma made with mezcal and gin. There’s also a 100-ounce sangria and a shareable rum punch.

In addition to the regular beef, chicken, and veggie burger, the Tiesto burger ($15) is topped with jalapeños, pico de gallo, and queso fresco. Sandwiches ($10 to $16) like Cuban and BLT have a side of yucca fries as an option. Besides Ecuadorean steaks and rice dishes, pizzas, pasta (mostly $16) like pumpkin ravioli, and entrees ($16 to $35) like paella, wine-brined short ribs, salmon la plancha, and buttermilk-fried chicken appear on the larger plate menu.

Lovers of churros and tres leches are lucky, and there’s also a warm salted caramel cake, blueberry-cheese tacos, and chimichangas (all $8) on the dessert menu.