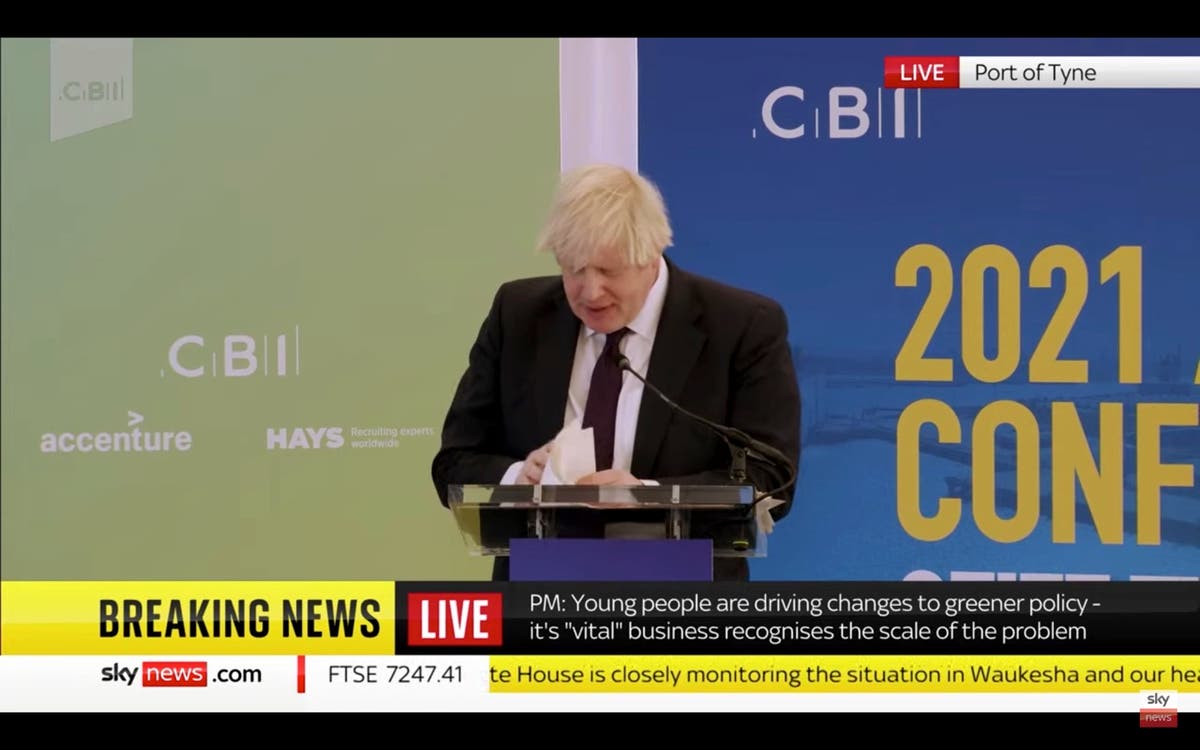 Boris Johnson He was floundering today when he lost his place in a high-profile address to business leaders.

The Prime Minister was struck with silence for 20 seconds while looking at his text, muttering “Forgive me, forgive me.”

The normally proficient prime minister had already stumbled over his words several times during the speech in front of CBI In Port Tyne, where he asked executives if they had visited Peppa Pig World and made “vroom vroom” car sounds as he described the acceleration of the electric car.

He also came close to taking the oath when he said he doubted people would always want to work from home except on Tuesdays, Wednesdays and Thursdays – “a shortcut I won’t repeat.”

When he told business leaders of his confidence that workers would want to return to the office, it became clear that he lost his place in the speech as Lip appeared briefly before shuffling the pile of A4 papers on the platform in front of him from him.

Not only will young people want to be in the office to learn from their co-workers, but there are also “evolutionary, sound reasons why Mother Nature doesn’t like working from home,” he said, in what appeared to be an improvisation in his text.

His audience was silent during the long layover as he told them “with safer streets, great local schools, great broadband…” before finally finding his place and continuing “…people will have the confidence to stay close to where they grew up to start Commercial Business “.

Even after he rehearsed his whereabouts in the speech, the Prime Minister continued to shuffle the papers in front of him and stumbled over his words, at times seeming to be struggling to fill in the gaps in the text with hasty comments.

He once told his audience of high-ranking presidents: “Yesterday I went – as we all should – to Peppa Pig World.

Prompting a chant of praise for a Hampshire theme park inspired by the popular preschooler’s cartoon, the prime minister asked, “Don’t know if you’ve been to Peppa Pig World?” Hands up who was at Peppa Pig World.

After a few CBI dignitaries raised their hands, the PM commented: “It’s not enough. It’s great. I was a bit fuzzy, but I was fine at Peppa Pig World. Loved it. Peppa Pig World is kind of my place to to a big limit.

“There’s very safe streets, a system in schools, and a lot of focus on mass transit systems, I noticed, even if it’s a bit stereotyped about Daddy Pig.”