A project backed by some of Dallas’s most prominent business and philanthropists will receive an additional funding boost from the federal government.

LaunchBio, a startup accelerator at a new Pegasus Park development near the Dallas Medical District, was awarded the US Department of Economic Development’s annual Build to Scale Program award Thursday. The Dallas LaunchBio Network will receive $2.1 million in total funding, with a $750,000 award from the federal government and $1.4 million in additional similar funding from local partners.

LaunchBio’s Dallas Network aims to bring together the resources of several local biotech accelerators and startup advisors to nurture the region’s startups as they develop into successful businesses. It will serve as a cornerstone of the Biotechnology Center+ in Pegasus Park, which has dedicated more than 40,000 square feet of offices and laboratories on its 23-acre campus to advance life sciences research and marketing in the Dallas area.

Funding from the Build to Scale Award will help LaunchBio and its local partners expand their business development offerings in Dallas and allow it to appoint a coordinator for internship development and student apprenticeships.

LaunchBio is a national non-profit organization that provides resources and networking opportunities for entrepreneurs looking to expand their life sciences startups. The organization has networks in many life sciences centers across the country, including San Francisco, New York, Durham, Cambridge, and Cambridge Massachusetts.

Pegasus Park hopes to provide Dallas-area researchers and entrepreneurs with a supportive environment to build their companies and reverse the company’s departure from more established biotechnology centers. The former Mobil Corp campus was revitalized by J.

For Cromit, the scholarship is a vote of confidence in the groups he helped bring together in Pegasus Park.

“It was really a team effort among the ecosystem to apply for this scholarship, which is why it is so exciting,” he said. “It’s a big win for North Texas to have all this economic activity and be based around the Biotech+ Center in Pegasus Park.”

The Pegasus Park campus is just one indication of the rapidly growing life sciences industry in North Texas. The Dallas Regional Chamber estimates that the area has more than 60 companies and 27,000 jobs in biotechnology and life sciences.

“What is that [grant] “Is it strengthening a mechanism for early-stage biotech companies to find a place and grow here,” said Duane Danksreiter, senior vice president of research and innovation at the Dallas Regional Chamber.

Real estate firm CBRE identified the Dallas-Fort Worth area as a key emerging market in the biotech industry earlier this year, reporting that North Texas firms received more than $310 million in venture capital funding between January and March 2021 — an increase of 376%. About the same time period last year. 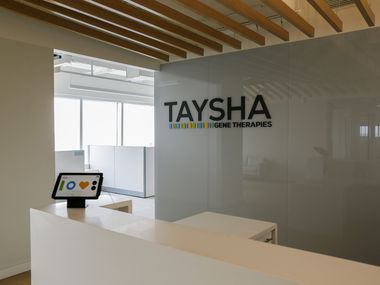 Dankesreiter says he’s already seen more biotech companies interested in relocating to the Dallas-Fort Worth area as the industry has gained momentum in recent years.

“This is about fostering a growing segment of our regional economy, and what they’re doing in Pegasus Park and the community that come together there is really strong,” he said.

Other recipients of Texas Build to Scale Awards include the Texas Research and Technology Foundation, the University of Texas at El Paso, and Trinity University. San Antonio-based TRTF will also support biotech startups with its award, using its $1.5 million funding to support VelocityTX, a business accelerator for biotech and health technology companies. UTEP will use its $3 million award to support El Paso’s existing manufacturing sector and help connect it to the national aerospace and defense industries. Trinity will use its award to create a student-run venture fund to distribute funding to startups in San Antonio and provide students with educational opportunities.