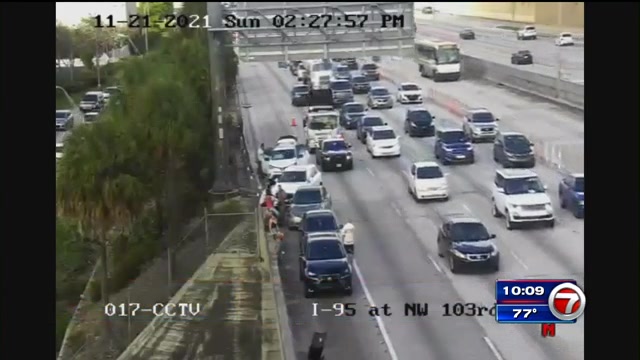 Northwest Miami Dade, Florida. (WSVN) – A chaotic, multivehicle collision on Interstate 95 in northwest Miami-Dade closed a lane and backs up traffic but no injuries were reported.

Florida Highway Patrol and Miami-Dade Fire Rescue units responded to the scene along the southbound lanes near the Northwest exit 103rd Avenue, at approximately 1:45 p.m., Sunday.

At least six cars were involved in the wreckage.

Troops closed off two southbound lanes near the Northwest 103rd Avenue exit during the investigation.

Mobile phone video captured the emergency crews at the scene.

Since then, all lanes have reopened to traffic.

Copyright 2021 Sunbeam Television Corp. all rights are save. This material may not be published, broadcast, rewritten or redistributed.