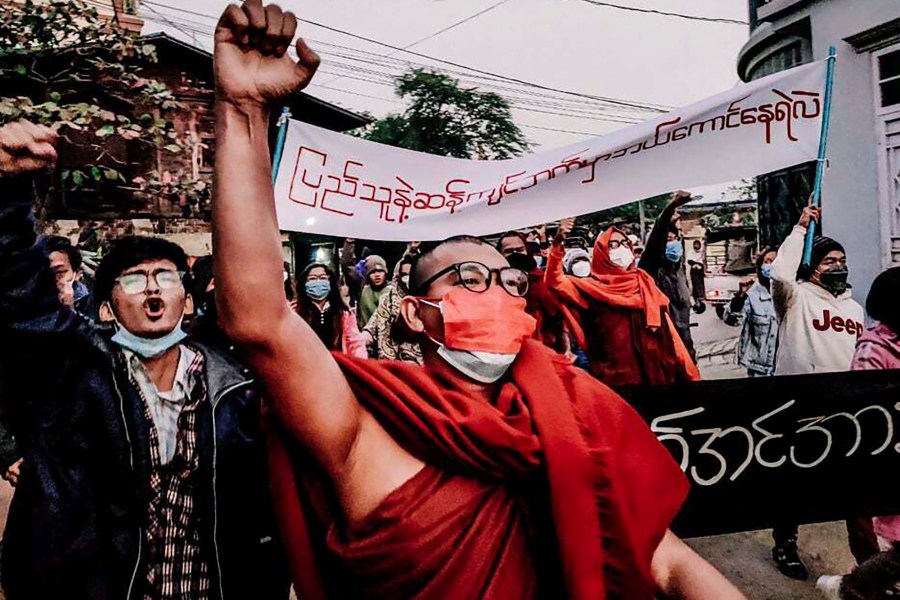 Bangkok (AFP) – Opponents of Myanmar’s military rule marked the first anniversary of the military’s seizure of power with a nationwide strike on Tuesday to show their strength and solidarity amid concerns over what has become an increasingly violent power struggle.

The “silent strike” sought to clear the streets of Myanmar’s cities and towns by keeping people at home and businesses closing their doors from 10am to 4pm.

In Yangon, the country’s largest city, and elsewhere, photos on social media showed that normally busy streets were almost empty.

The anniversary has also attracted international attention, especially from Western countries critical of the military coup, such as the United States.

In a statement, President Joe Biden called on the military to reverse its actions, release the country’s ousted civilian leader Aung San Suu Kyi and other detainees and engage in meaningful dialogue to return Myanmar on the path to democracy.

The military seizure of power on February 1, 2021 led to the overthrow of the elected government of Suu Kyi, whose National League for Democracy (NLD) party was on the cusp of starting a second five-year term after its landslide victory in November elections last year. The military said it acted because of widespread ballot box fraud – a claim that independent election observers said they saw no serious evidence of.

Large-scale peaceful demonstrations followed the army’s initial seizure of power, but armed resistance arose after the protests were put down with deadly force. About 1,500 civilians have been killed, but the government has been unable to quell the revolt, which some UN experts now describe as a civil war.

On Monday, the United States imposed new sanctions on Myanmar officials, in addition to those already applied to senior military officers. They freeze any assets these targets may have in US jurisdictions and prevent Americans from doing business with them. Britain and Canada announced similar measures.

A statement from the office of UN Secretary-General Antonio Guterres highlighted the “escalation of violence, deepening human rights and humanitarian crises and the rapid escalation of poverty in Myanmar,” which it said requires an urgent response.

Before the start of the Tuesday strike, people in Myanmar rushed to buy necessities, and appeared to be shopping in Yangon on Monday.

Pro-democracy rallies were held in several places before the strike began in the early morning hours, when clashes with police and soldiers were less likely.

Violence is continuing on Monday, with the resistance forces believed to have carried out at least six bombings in Yangon, and another at a police station in Myitkyina in northern Kachin state, local media reported. The opposition conducts daily guerrilla action, while the army engages in large-scale attacks in rural areas, including air strikes, which are blamed for many civilian casualties.

Despite tight security in cities such as Yangon, Mandalay and Sajang, young protesters, including Buddhist monks, staged enthusiastic but peaceful protests at dawn, carrying banners and chanting anti-military slogans.

Many also raised three fingers, the resistance salute taken from the movie “The Hunger Games” and also used by pro-democracy protesters in neighboring Thailand.

Shop owners were threatened with arrest by the authorities; Thus some of them were open for business on Tuesdays, but seemed to have few, if any, customers.

Since last week, the government has issued official warnings in the state-run media that anyone participating in the strike could be prosecuted, including under the Anti-Terrorism Act with a maximum penalty of life imprisonment and possible confiscation of their property.

Dozens of business owners who announced they intended to close their doors have been arrested, according to reports in the state newspaper, the Myanmar Allen Daily.

Among those arrested, from different parts of the country, were shopkeepers, restaurateurs, medical workers, a monk, a make-up artist, a mobile phone repair shop owner, and a miner.

The government installed by the army began other measures to try to undermine the strike. In Yangon and Mandalay, city managers have scheduled special events, including a cycling competition, in an effort to attract crowds. City workers in Yangon have been asked to attend during strike hours, according to leaked documents posted on social media.

Several pro-military demonstrations were also held, widely believed to have been organized by the authorities.

Dua Lashi La, the acting head of the opposition Government of National Unity, said the people understand the group as the guiding force of the revolution, and they promise to do their best to make the revolution a success. The Government of National Unity, established by elected legislators, considers itself the legitimate administrative body in the country and has won the loyalty of many citizens. The army described it as a “terrorist” organization.

Senior General Min Aung Hlaing, leader of the government formed by the army, reviewed its performance since taking power in an hour-long speech. He pledged a “real and disciplined multi-party democracy”, calling for cooperation “to achieve a better future for the country and the people”.