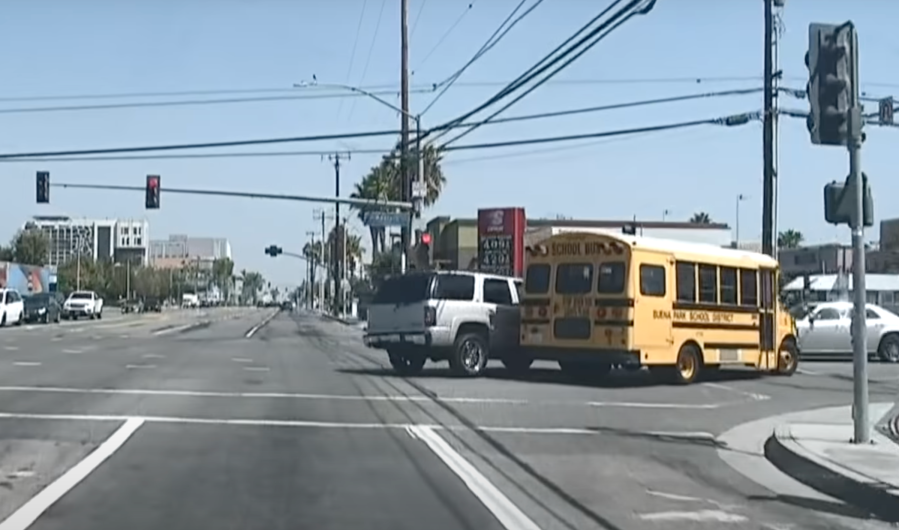 Authorities on Thursday released a dashcam video of the sensational pursuit and fatal shooting of a man who rammed and shot a school bus that his wife was driving before being shot and killed by police in Buena Park.

The high-speed chase began on the afternoon of September 3, when an officer on patrol in Orangethorpe and West Avenue discovered a silver SUV crashing into the school bus.

Then the officer saw the SUV driver, later identified as 60-year-old Cedric Baxter, pulling out a gun and shooting the bus, Buena Park, a police sergeant. Chad Weaver said in a video statement.

Weaver said a 6-year-old boy was on the bus driven by Baxter’s wife, whom the man was trying to kill.

The man then got back into the car and ran away when the officer began a chase.

The suspect drove dangerously, chased and repeatedly collided with the school bus in front of the officer during the high-speed pursuit, Dashcam drawing video The police released him and showed up.

At one point, Baxter drove to the Buena Park School District bus maintenance yard at 6800 Orangethorpe Street, circled the parking area and then back onto the city streets.

The chase continued, with the SUV accelerating, driving over sidewalks, turning on stop lights, sometimes driving in the wrong direction and nearly hitting several cars.

The video shows that after hitting the SUV, the man came out with what appeared to be a pistol in his hand.

As he got out of the car, a rapid succession of gunshots was heard and the man pointed the firearm in hand at the police as he fell to the ground and the shooting continued.

It is not clear if he shot the officers.

A body-worn camera released by police showed at least two officers quickly getting out of their patrol cars and shooting the man after he crashed.

He was later seen standing still on the ground as officers pointed firearms at him saying “Get ready”, “He has a gun” and yelled at him “Throw the gun”.

Police released photos of a black rifle they said Baxter used, as well as a photo of a bullet hit on the school bus.

“The investigation revealed that this was not a random act, but that the school bus driver was Mr. Baxter’s wife, and he intended to kill her,” said the sergeant.

Buena Park Police said his wife has an active domestic violence restraining order against Baxter due to an incident in Los Angeles County.

At the time of the shooting, Baxter was on parole for car theft and his parole was rescinded.

Weaver added that there was an active parole warrant against Mr. Baxter and he cut off his GPS monitor in connection with his sexual offender status.

The police shooting is still under investigation.

The Orange County District Attorney’s Office is conducting an investigation into the actions of the officers involved to determine if their actions were within the law.